More than two dozen Toronto Hydro workers have left for Ottawa to help restore power to homes and other critical infrastructure following the deadly weekend storm.

A significant thunderstorm tore through much of southern and eastern Ontario on Saturday, leaving 10 people dead and hundreds of thousands without power.

In Ottawa, four hydro transmission towers were destroyed, resulting in tens of thousands of homes being cut off from electricity. Five days later, there remains nearly 60,000 customers without power.

In a statement, Toronto Hydro said their partners in Ottawa made a formal request for storm assistance and they would be answering the call. As a result, 26 people left for Ottawa Wednesday morning.

"Thanks to the dedication of our crews and the patience of our customers, we’ve made significant progress in our restoration efforts at home, and we’re fortunate that we now have the capacity to help our neighbours in Ottawa as they deal with significant damage throughout their city.”

At the height of the storm, Hydro One alone was reporting that 500,000 customers experienced power outages. 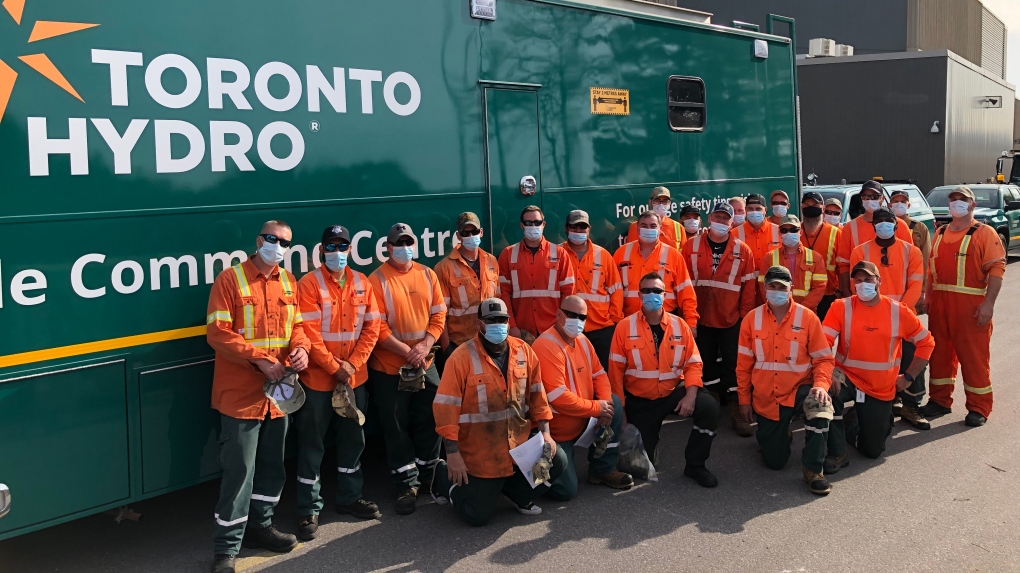 A Toronto Hydro crew prepares to go to Ottawa on May 25, 2022 to help with storm cleanup. (Toronto Hydro)

The number of downed poles appears to be increasing daily. On Wednesday, Hydro One said more than 1,600 poles had been broken and a countless number of trees and wires were knocked down.

"Hydro One crews continue restoration efforts as quickly and as safely as possible following Saturday's destructive storm alongside approximately 500 employees from other utilities and contractors," a storm warning on their website says.

"Due to the severity of damage, restoration efforts are expected to continue for several days before power is restored to all customers."

Toronto Hydro said that about 110,000 customers in the city were without power right after the storm, but electricity has been restored to about 99.8 per cent of those impacted.

A transmission tower in Peterborough was also knocked down.

More than 30,000 residents of Sydney and its surrounds have been told to evacuate or prepare to abandon their homes on Monday as Australia’s largest city braces for what could be its worst flooding in 18 months.