The world's first stadium with a fully retractable roof turned 25 on Tuesday, remaining an integral part of Toronto's skyline years after its elaborate opening ceremony.

The stadium at the base of the CN Tower opened two months behind schedule, after taking more than two years to build.

A fan named the stadium as part of a contest. Her submission, 'SkyDome,' was picked from a barrel full of 150,000 entries by then-premier David Peterson.

Two days after the official opening, the Blue Jays played their first regular season game at their new home stadium, losing to the Milwaukee Brewers 5-3 in front of a crowd of 48,378.

The Toronto Argonauts played their first regular season game just over a month later, on July 12, losing to the Hamilton Tiger Cats 24-15.

Years later, the stadium, which holds 54,000 fans, is still home to the Blue Jays and the Argos.

Since 1989, it's played host to countless events, from the CFL's Grey Cup to massive concerts. Nelson Mandela spoke at the SkyDome in 1998, and the Dalai Lama gave a speech in 2004.

The stadium has also hosted the Canadian International AutoShow, Disney on Ice, circuses and monster truck shows. WrestleMania X8 was held in the SkyDome in 2002, and UFC 129 drew thousands of fans in 2011.

Next year, the stadium will host the opening and closing ceremonies of the Pan Am Games.

To mark the SkyDome's 25th anniversary, the Blue Jays are holding a celebration when they host the St. Louis Cardinals on Friday night. Former Blue Jays pitcher Jimmy Key and catcher Ernie Whitt, Glass Tiger lead singer Alan Frew and the SkyDome's first mascot, Domer the turtle, will be in attendance. 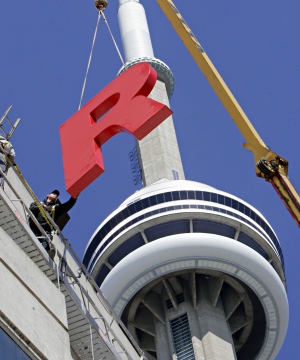