Toronto residents can expect a warmer than usual fall season 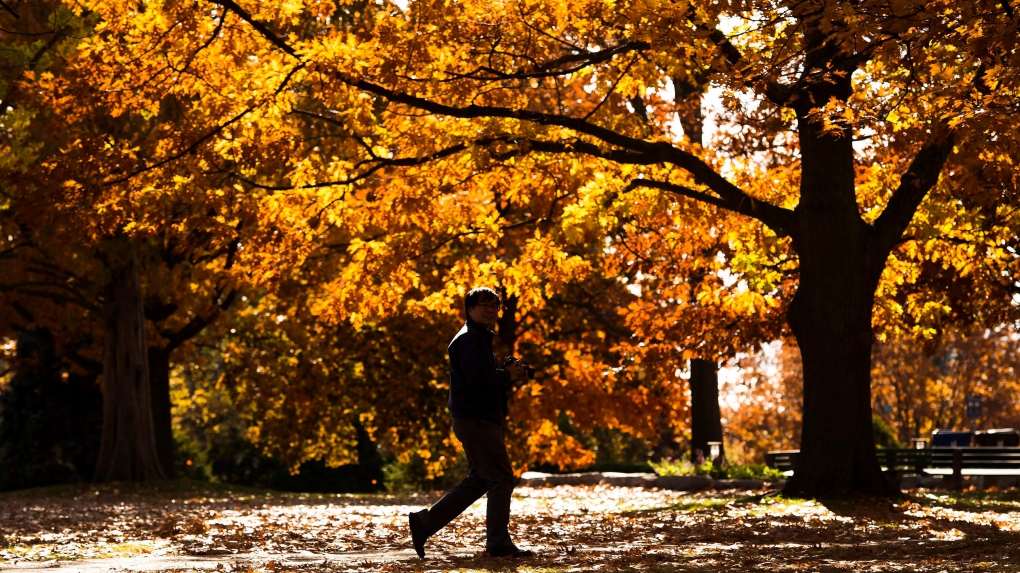 A person is silhouetted as they walk through the fall trees at High Park in Toronto Wednesday November 9, 2016.THE CANADIAN PRESS/Nathan Denette

TORONTO -- If you enjoyed the hot weather this summer in Toronto, this fall season, which kicks off today, may bring conditions that are favorable to you.

“For those who like above-normal temperatures, it looks like that’s going to continue to be the case over the next three months,” Environment Canada Meteorologist Gerald Cheng said. “However, seasonal norms are going down day by day, so we won’t be holding on to that 30-degree weather.”

There was no shortage of 30-degree weather in summer 2020. In fact, in terms of mean temperatures, it was the warmest July at Pearson International Airport since record-keeping began.

“It was hot,” Cheng said. “We also had a nine-day heatwave where the daytime high was 30C or above, and that hasn’t happened since 2001.”

There were also some hot days in August and early September, but temperatures have become a little more typical for this time of year in recent weeks.

“I think we were very spoiled for those of us who like the heat, because it was sort of an abrupt end to summer and we’re going back to more seasonal values,” Cheng adds.

Fall officially arrived Tuesday, September 22 at 9:30 a.m. With autumn, people living in the GTA can start to experience different weather patterns in the coming weeks.

“We need to expect those big systems coming back, bringing steadier rains that last the whole day,” Cheng said. “Then, in late October and early November, we’ll be going into snow season.”

Precipitation like freezing rain and ice pellets will also become more common. If conditions are right, snow squalls can also begin as early as October.

“That doesn’t mean we’re finished with thunderstorms,” Cheng notes. “We may still get those quick, heavy downpours at times, as well.”

“Fall is a transitional season,” he adds.

As for winter, Cheng says we may be able to start planning for more in the way of precipitation.

“What’s interesting is it looks like La Nina is developing, meaning that the sea surface temperatures in the Pacific along South America are cooler than normal,” he said. “Usually that would mean more precipitation in the winter time, but we still have to wait and see because right now it is still quite weak.”

Until then, Ontarians are encouraged to get outside and enjoy fall, especially in the early weeks of the season.

“The leaves are even starting to change within Toronto, and we’ve seen recently seen some big temperature swings and that’s very typical of fall,” Cheng says.

“So even when say above-normal, we shouldn’t expect that we will consistently be above-normal daily. There will be stretches below normal, as well.”