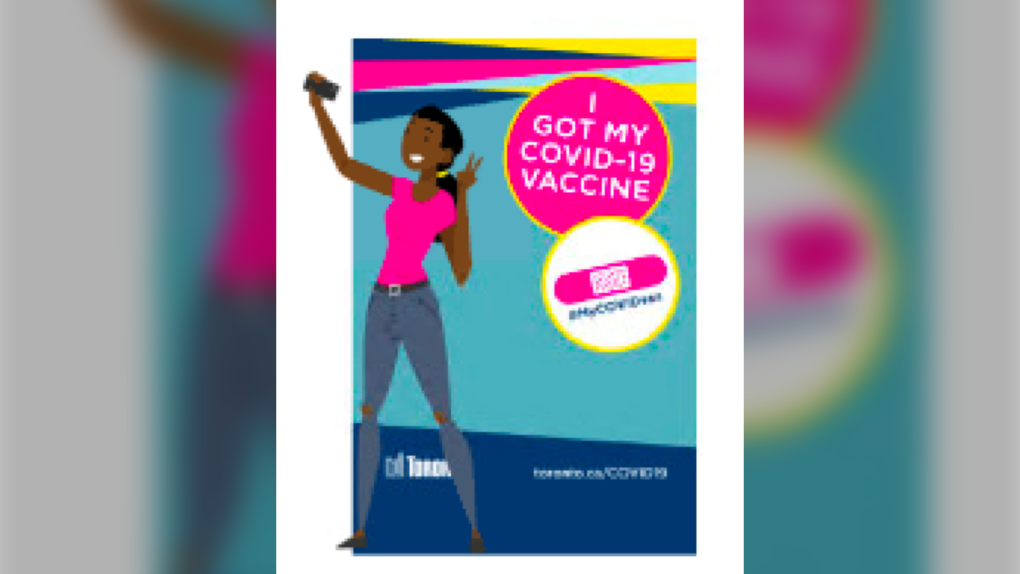 A sample selfie station is seen in this graphic presented in City of Toronto, Toronto Public Health Playbook for the COVID-19 Vaccination Program.

TORONTO -- The City of Toronto is purchasing about two million pink Band-Aid stickers and will be setting up selfie stations at immunization clinics as part of a COVID-19 campaign to combat vaccine hesitancy.

The social media campaign is part of the city’s vaccination playbook and aims to “excite, promote and encourage immunization through a pink Band-Aid.”

As part of the “Pink Band Aid Campaign,” Toronto residents who receive the vaccine will also be given a sticker and may be able to take a photograph at a selfie station positioned near the exit of the clinic.

Brad Ross, a spokesperson for the city, said the selfie station is a way to “celebrate having been vaccinated” and that staff will ensure there is no crowding near those areas.

Ross also confirmed that the city will be purchasing about two million of the stickers as part of the campaign.

“After any vaccine, the area on the arm where the shot is received is covered with a Band-Aid. It’s really just a symbol of having been vaccinated and something to celebrate,” he said in a statement to CTV News Toronto.

“They’re not unlike the 'I Voted' stickers you sometimes see during an election.”

There will also be an opportunity to add a pink band aid to social media avatars.

The bright pink Band-Aid is expected to be a consistent feature in the city’s communications strategy, and will be seen on most materials related to mass immunization, including posters, advertising on transit shelters and digital billboards. The city hopes the neon pink will ensure the messaging about the COVID-19 vaccine stands out.

The purpose of the campaign is widely meant to encourage Toronto residents to book an appointment to get COVID-19 vaccine. City officials emphasize in the vaccination playbook that “keen attention will be paid to the social determinants of health such as race, income and food security, housing, and disability, to drive a targeted equity engagement and mobilization strategy.”

On Monday, officials said there will be more than 350 different locations administering COVID-19 vaccines in Toronto once supply improves, not including mobile or pop-up clinics.