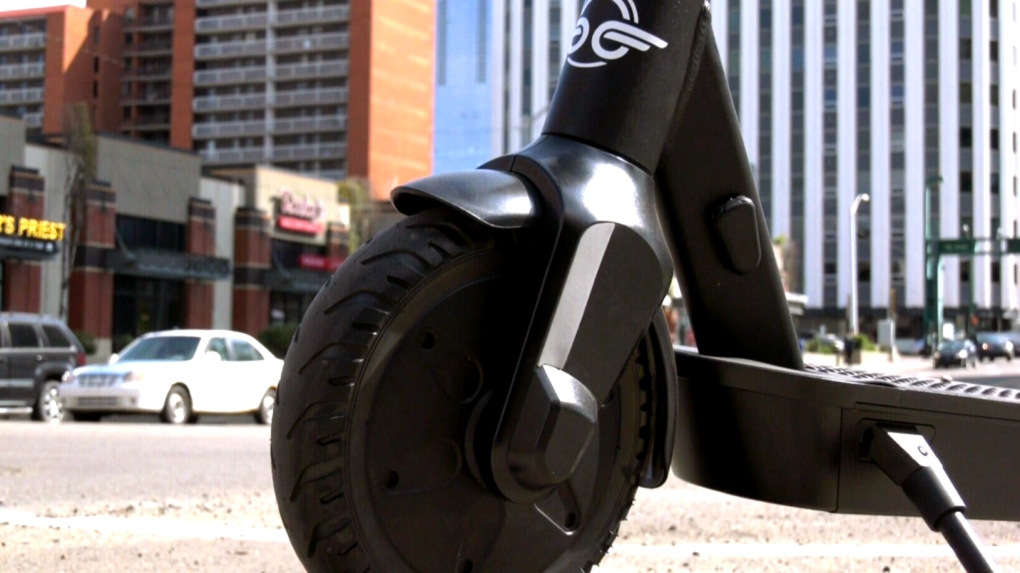 An e-scooter is seen in this undated file image. (CTV News)

TORONTO -- Toronto may opt out of a provincewide pilot project allowing the use of electric scooters on Ontario roadways.

The five-year pilot project, which officially began on Jan. 1, 2020, gave municipalities the green light to allow e-scooters to operate on a roadway or on the shoulder of a highway.

The scooters must not exceed a maximum speed of 24 km/hr and must have a horn or a bell, the legislation says. Riders must be at least 16 years old and anyone under the age of 18 must wear a helmet.

In order to allow the pilot project to take place, municipal bylaws would need to be amended.

In July of last year, Toronto’s city council asked their transportation services department to look into accessibility and insurance issues after hearing concerns from advocates and residents.

Among the list of concerns were safety for people living with disabilities and seniors due to e-scooters illegally operating on sidewalks, lack of city resources for enforcement, and issues surrounding liability and insurance.

“Based on extensive research and feedback, this report concludes that accessibility barriers, safety concerns and insurance issues remain unresolved for privately owned and rental e-scooters,” the report, which is scheduled to be presented to the Infrastructure and Environment Committee next week, said.

“The solutions proposed by e-scooter industry participants are not satisfactory in addressing the concerns from the Toronto Accessibility Advisory Committee, disability groups, residents, and City staff. Accordingly, City staff recommend that Toronto not opt-in to the e-scooter pilot.”

City staff say that the pilot program would create “a general safety hazard in the public realm.” add further barriers for the elderly and persons living with disabilities, create a burden on pre-existing infrastructure and would be poorly enforced.

Meanwhile, a study conducted in April 2021 by Nanos shows that a majority of people in Toronto would support an e-scooter pilot.

The online survey was conducted between April 14 and April 16. Of the 751 residents who responded, about 76 per cent said they would either support or somewhat support the city allowing more environmentally friendly transportation options.

About 12 per cent of respondents said they were “unsure.”