Toronto City Manager Joe Pennachetti says the city “does not believe it is currently necessary” to declare a state of emergency after a weekend ice storm left hundreds of thousands of customers without power.

In a letter to Rob Ford and all city councillors, Pennachetti noted that some council members have called on the mayor to declare an emergency, which would make additional resources from the province available.

Pennachetti said a state of emergency would be declared in the event that “the city is no longer able to meet its own needs and has exhausted its resources.”

The Province has indicated that all available resources will be provided regardless of the declaration of an emergency,” Pennachetti wrote in the letter sent earlier Monday.

“The city has requested forestry crews and is coordinating with the province on obtaining fuel and facilities. Toronto Hydro has also asked for extra crews. So, at the operational level, the city is working with the province and a formal declaration of emergency will not change the situation.”

Pennachetti noted that the province can declare a state of emergency without a request from the city, in order to “control travel and evacuate geographic areas.

“If the city believed that it was necessary to seek these additional powers through requesting a declaration of emergency, it would do so. However, the city does not believe it is currently necessary.”

Earlier Monday, Councillors Kristyn Wong-Tam, Joe Mihevc and James Pasternak were among those who said it's time for Ford to declare a state of emergency.

Ford has the power to declare a state of emergency. However, following a vote by city council last month, authority over the emergency falls to Deputy Mayor Norm Kelly. Ford was stripped of most of his executive powers in November amidst the ongoing scandal over his alleged drug use.

"Power out throughout the City and temperatures dropping. Time for Mayor to declare a state of emergency," Mihevc tweeted Monday afternoon.

Wong-Tam tweeted: "Toronto Hydro has been operating under Level 3 Emergency since Saturday. According to Mayor Ford there's no emergency."

Ford said Monday that the city will not be declaring a state of emergency, as Toronto Hydro had successfully restored power to thousands of residents overnight.

Coun. Denzil Minnan-Wong, who chairs the city’s public works department and who at times has been a vocal opponent of the mayor, said he was in favour of any action that would restore power the quickest, but added that “declaring a state of emergency is not going to fix hydro lines any faster.”

Minnan-Wong said provincial officials have been sitting in on all of the city’s crisis management meetings and that provincial forestry trucks are being used to clear many roads.

In his letter, Pennachetti said the city’s emergency operations centre has been coordinating its response with its provincial counterpart, as well as with staff at Toronto Hydro, Toronto Community Housing and the TTC. 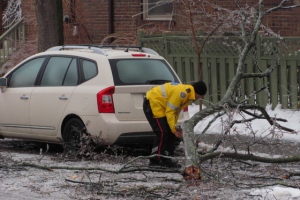