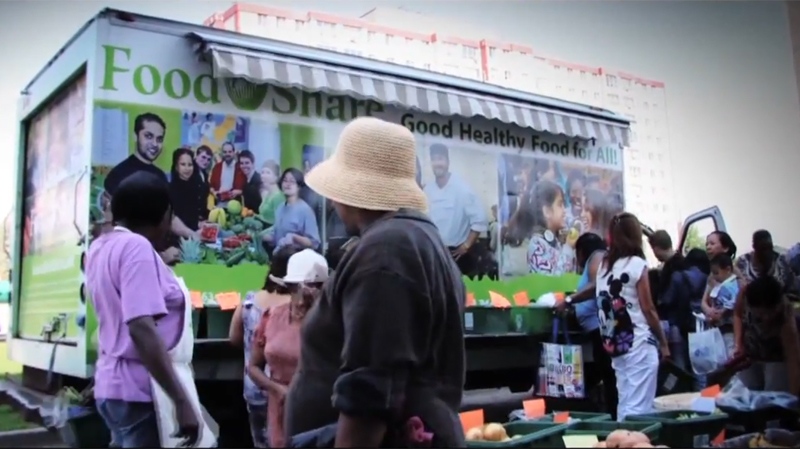 The Mobile Good Food Market, a retrofitted bus, will routinely travel across Toronto selling fresh produce and other goods in neighbourhoods that have been identified as lacking quality food retail options within an appropriate walking distance. (Photo courtesy Foodshare.net)

Toronto launched its first-ever food market on wheels Thursday, in an effort to address a lack of access to healthy food in some Toronto neighbourhoods.

The Mobile Good Food Market, a retrofitted bus, will routinely travel across the city selling fresh produce and other goods in neighbourhoods that have been identified as lacking quality food retail options within an appropriate walking distance.

Armed with umbrellas on a rainy Thursday morning, visitors were given a chance to taste samples from the mobile food market at its official launch in downtown Toronto.

Despite the rain still a great turnout for the public unveiling of the Mobile Food Truck pic.twitter.com/j9n3iSLc4f

The initiative is a partnership between United Way, the City of Toronto, the Centre for Addiction and Mental Health, and Foodshare, a non-profit organization that aims to improve access to healthy food.

The mobile grocery store is one way to help the significant number of Torontonians who face economic as well as geographic barriers to food, Foodshare executive director Debbie Field says in a video posted on the organization's website.

"When you bring produce at affordable rates into low-income communities, you create a variety of social goods,” she said. "You help increase food access, you also encourage people to eat … healthy food.”

A 2011 United Way report found that poverty is increasingly concentrated in high-rise tower communities, where restrictions on transportation and other barriers often left a gap in access to food and other programs and services.

"What we wanted to do was ensure that we brought some of those very services to them," Susan McIsaac, president and CEO of United Way Toronto, says in the video.

Already, a Foodshare truck has been visiting neighbourhoods, setting up shop with an awning and a table. The response has been positive so far, with residents putting in requests for certain food items.

Community support worker Nadine Sarkodi said the mobile market has had a significant impact on seniors, who can shop locally.

"It's saved them from travelling outside and carrying the load back and forth to their home," she said.

"As you come downstairs to the food truck, you have an opportunity to talk with your neighbour,” she said.

Organizers say they are working with city departments, including the municipal licensing department and public health, to "open up” the restrictions on produce trucks so that the program can be expanded to other parts of the city.