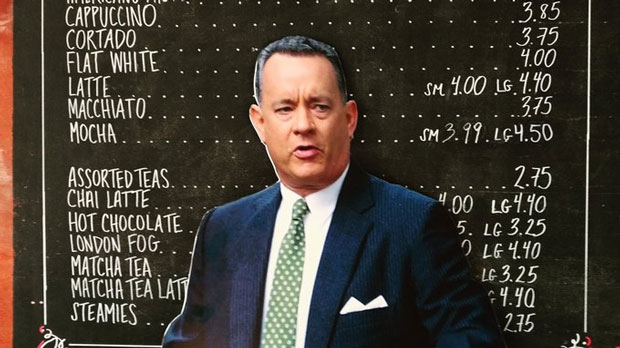 A cardboard cutout of Tom Hanks can be spotted at Grinder Coffee in a campaign to get the star to visit the local establishment. (Twitter/@GrinderCoffeeTO)

After successfully convincing Canadian actor Ryan Gosling to visit an east-end coffee shop during last year’s Toronto International Film Festival (TIFF), a store owner is at it again—this time trying to convince the star of “A Beautiful Day in the Neighbourhood” to stop by.

Joelle Murray, the owner of Grinder Coffee in Leslieville, has launched a grassroots social media campaign in an effort to sway American actor, filmmaker and Oscar winner Tom Hanks to come to her shop.

“The criteria is always ‘who I want to have coffee with,’” said store owner Joelle Murray. “This year, the two candidates were Meryl Streep and Tom Hanks.”

The choices were presented to customers and fans of the coffee shop on social media, who all had a chance to weigh in on the important decision.

On Aug. 31, the campaign was launched. The first post to Instagram featured a cardboard cutout of Hanks outside the coffee shop, holding a Grinder coffee-themed mug with the caption “welcome Tom Hanks for what is going to be a fun ride.”

On the third day of the campaign, the coffee shop’s Instagram page features a photo of the Hanks cutout alongside Murray, who is standing on a giant piano—an homage to the film “Big.”

“We recreated one of your classic movie scenes in order to show our dedication @tomhanks to having you visit during #tiff . We included the original photo for reference so you can see how we really #nailedit,” the post said.

Day 3 of our #tomneedsgrinder campaign. We are really going #big on our campaign. We recreated one of your movies to show our dedicatation. We included the original photo for reference so you can clearly see we #NailedIt . Never showed that kind of #love for @idriselba #TIFF pic.twitter.com/xJvMEjE9ko

Murray said that she has received a lot of support from other local businesses in the area as well as customers. She told CTV News Toronto that someone showed up at her coffee shop one day with a suitcase that they thought looked like the prop used in “Forest Gump.”

“A lot of this campaign is also built out of fandom. It’s built out of excitement, pride in my shop, pride of my neighbourhood, pride in the City of Toronto,” she said. “A lot of people get behind it because if I can do it, anyone can do it.”

The campaign was based around when Hanks’ film, “A Beautiful Day in the Neighbourhood,” is set to be screened, which means there is still about four days left to reach the star.

“We have a couple of ideas,” Murray said. “I may or may not be getting a tattoo.”

“It’s about whimsy. At the end of the day, if he doesn’t come, it’s still a very fun thing to do.”

Murray’s first campaign was in 2017, when she invited Idris Elba to stop by while he was at TIFF for his film “Molly’s Game.” While Elba did not show up, it didn’t discourage Murray, who launched a similar campaign the following year in hopes of getting Gosling to come by.

She never actually expected him to show. 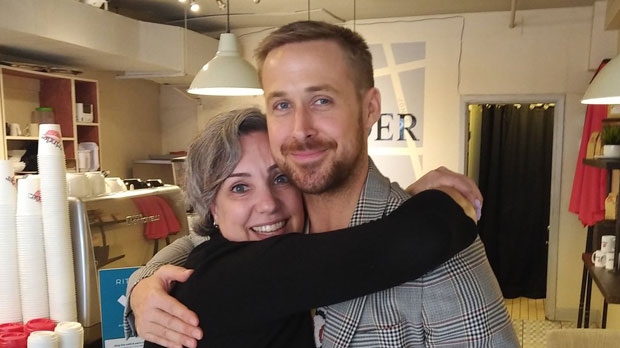 Ryan Gosling is seen visiting a Toronto coffee shop while in town. (Twitter/@GrinderCoffeeTO)

“It was a total shock,” she said. “I would have chosen my words better because when media started calling me, I was like ‘I can’t tell you what I said because I swore.’ When Tom comes—it’s not if, it’s when—when he shows up I am going to be way classier. I’m more prepared and seasoned this year.”

She said that “when” Hanks comes, he should feel free to bring some friends.

“If Tom Hanks comes, I gotta throw him a coffee,” she said. “But, I have offered him 15 per cent off for his entourage … or friends, like say Meryl Streep.”