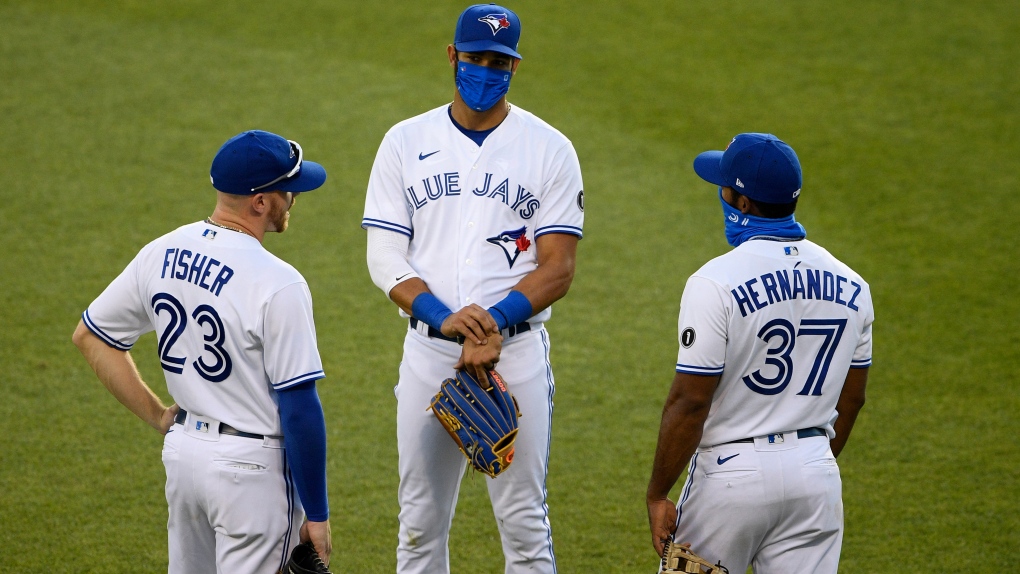 TORONTO -- In a regular season that has had its share of uncertainty, hurdles and challenges, the Toronto Blue Jays were dealt another curveball Thursday when their upcoming series in Philadelphia was postponed after the Phillies reported that two staff members had tested positive for COVID-19.

Blue Jays manager Charlie Montoyo confirmed the postponement on a video call before Thursday afternoon's game in Washington. Montoyo said the team plans to stay in the U.S. capital until new travel plans can be finalized.

"We've got to deal with it, it is what it is," Montoyo said. "Hopefully MLB works through this. We've got games coming up. But that's all I know right now."

Montoyo said the Blue Jays will ask the Nationals if they can continue to work out at Nationals Park until next steps are finalized by Major League Baseball. Toronto has an off-day Monday and a three-game series at Atlanta is scheduled to begin Tuesday.

Earlier in the day, the Phillies announced that all activity at Citizens Bank Park has been cancelled until further notice.

Tests conducted Wednesday returned a positive result for a member of the coaching staff and a member of the home clubhouse staff, the Phillies said. All players tested negative.

The Blue Jays and Phillies were scheduled to play a doubleheader Saturday and a game Sunday at Citizens Bank Park. The Phillies haven't been in action since Monday's discovery of a coronavirus outbreak among the Miami Marlins, who played a season-opening series in Philadelphia last weekend.

The Phillies' four-game, home-and-home series against the New York Yankees was postponed this week by MLB. The Toronto-Philadelphia series was originally set to begin Friday, but the opener was pushed back to Saturday afternoon.

MLB said Wednesday that the Blue Jays-Phillies series would go ahead after Phillies players and on-field staff tested negative for COVID-19 for a second straight day. A message left Thursday afternoon with an MLB spokesman was not immediately returned.

Toronto was scheduled to be the home team in Philadelphia. The Blue Jays are playing home games in their opposition's park until their temporary home in Buffalo, N.Y., is ready on Aug. 11.

In Thursday's series finale against the Nationals, the Blue Jays were set to be the home team for the second straight game.

Earlier this month, the Blue Jays made a proposal to play home games at Toronto's Rogers Centre during the shortened 60-game season but the federal government shut down the plan due to concerns about COVID-19.

With files from The Associated Press.

This report by The Canadian Press was first published July 30, 2020.