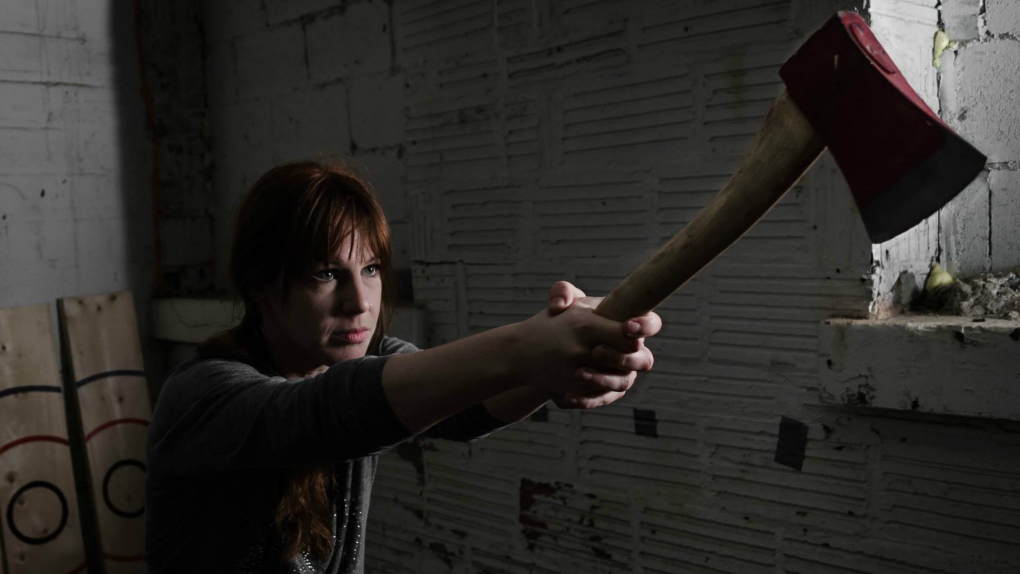 It sounds like the most niche of hobbies, but axe throwing is quickly becoming one of Toronto's most popular sports.

"We're at 210 league members at our new location. Then we've got 128 who have been throwing at our old location for a long time," Matt Wilson, founder of the Backyard Axe Throwing League, or BATL, tells CTVNews.ca.

With hundreds of members, and a new-purpose built location for the league, BATL is having no problem attracting members. However, they do have some trouble explaining to friends just what it is they do.

"You tell them you're going to come and throw axes, and they usually go 'Sorry, what? What are you talking about?' You have to tell them three or four times for it to sink in."

It’s not just throwing axes wildly. The Backyard Axe Throwing League has clear rules for competition, and all throwing is supervised by coaches. Throwers compete weekly in one-on-one matches. In each match, competitors throw five axes each round, for three rounds. Points are scored based on where axes land on a wooden bullseye. Wins, losses, points and other stats are recorded by league staff.

Founded in Wilson's backyard in Little Italy in 2006, BATL still throws at its original location on Sterling Road. The growth of the league and long waiting list for entry, however, led to the opening of a second location, a warehouse called BATL Grounds on Villiers Street by the lakeshore. Both locations feature throwing lanes, targets, and throwing axes standardized for league play.

Despite how far the league has come however, Wilson said the roots of the Backyard Axe Throwing League go all the way back to a rainy day at a cottage south of Toronto, years ago.

"I was at Turkey Point, at a friend's cottage. It was crappy weather, there wasn't a whole lot of stuff to do on the lake," Wilson explained. On that rainy day, one of his friends took out a hatchet, and taught him how to throw an axe.

When he got back to Toronto, Wilson's roommate joined him in setting up a target in their backyard. After they invited friends to join them, those friends invited more friends, and Wilson soon organized them into a league.

For Jennifer Benedict, her path to BATL started at a bar where she worked.

"I had this co-worker, and he was one of my favourite people. And he used to come in every Wednesday really hungover. It boggled my mind, because what would you do on a Tuesday night that would make you that hungover? And he told me that he threw axes, and I thought he was joking,” Benedict told CTVNews.ca.

A few weeks later, Benedict decided to see BATL for herself.

"There were like a lot of big guys with beards, and I'm just this little girl throwing," she explains. "So it was a little bit intimidating but they were very encouraging."

Benedict soon found her feet, though.

"As soon as I sunk my first axe, they had me," Benedict said.

"You feel this awesome sense of power when you hear that thud and pull it out of the wood. It's wonderful," she added. Benedict has now been throwing axes for four years.

"I'm just way more consistent now," she said. "I'm a little more calm. Some might people might say otherwise because I swear a lot."

Wilson has big plans for the future of the Backyard Axe Throwing League.

"One day we're going to open a location in another city. Absolutely."

Through Facebook, they've reached out to other axe throwing communities, from as far away as Switzerland. But Wilson says nobody throws axes like they do in Toronto.

"We've got kind of the more city-style version. Everybody else does a larger axe on a shorter throwing format. They'll throw three axes for a round, then call it done," Wilson explains. In Toronto, participants are expected to throw fifteen times for each match. Wilson jokes that the format comes from his love of long tennis matches.

"I call it the Wimbledon-style of axe throwing," Wilson said.

He encourages anybody interested to come out and give it a try. Despite what Benedict's coworker led her to believe, BATL is not a bacchanalia. The entire affair is BYOB, and there is no hard liquor, and no glass allowed. Cans only. And as expected in a building where there are open cans and axes flying, everyone is expected to follow the coach’s instructions closely.

"Come out and visit us on a league night. Visitors always welcome. Come check it out," Wilson said.

"A lot of people think it's hard, or slightly scary at the same time," but Benedict added, "Anyone can do it."’