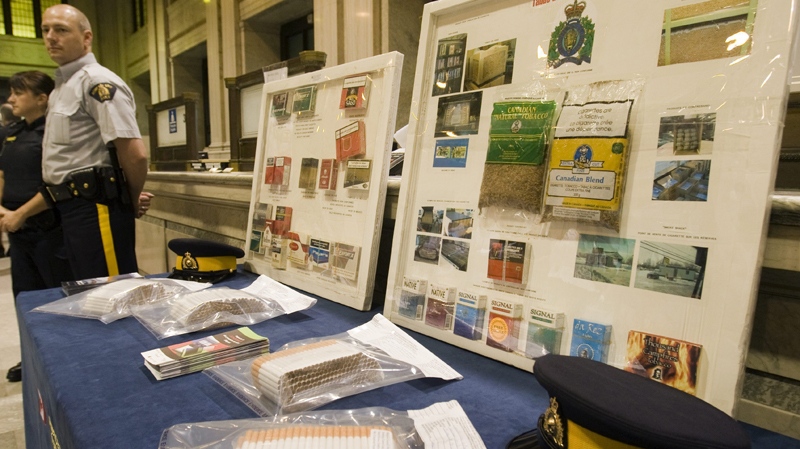 Contraband tobacco is displayed at a news conference where the Canada Border Services Agency announced it would begin using sniffer dogs to combat the illegal tobacco trade in Montreal, Friday, May 28, 2010. (Ryan Remiorz / THE CANADIAN PRESS)

TORONTO - Two Ontario tobacco producers are taking Ottawa to court over so-called smoke shacks, accusing both the federal and provincial governments of turning a blind eye to the sale of contraband cigarettes.

In the proposed class-action lawsuit, Stanley and Linda Koscik and Weninger Farms Ltd. -- both in Aylmer, Ont. -- claim Ottawa "knowingly and deliberately" failed to collect taxes from illegal smoke shacks.

The allegations have not been proven in court.

There are almost 350 illegal smoke shacks in Ontario and Quebec, which are forcing many retailers -- most of them families -- to close their doors, according to the Canadian Convenience Stores Association.

Cartons of black-market cigarettes usually sell for $11 or $12, compared to nearly $50 for a carton of legal smokes, said Michel Gadbois, senior vice-president of the association.

"It's a total injustice," he said. "You have two laws that do not apply to the same citizens. If you can't enforce the law, then act."

About 35 to 40 per cent of all cigarettes sold in Ontario and Quebec are contraband, Gadbois said.

"That's where the money goes. And you can imagine what they do with that money."

The RCMP warned in a progress report last May that illegal tobacco "continues to attract organized crime, undermining Canadians' expectations of safe communities and economic integrity."

Last year, the national police force seized about 975,000 cartons of illegal cigarettes across Canada, higher than 2008's record haul of 965,000 cartons and more than double what the RCMP seized in 1994.

"The illicit trade in tobacco products continues to be a serious threat to public safety and the health of Canadians," the report stated.

"The trafficking in illegal cigarettes in Ontario is widespread, it's notorious, it's well known," he said. "The police have refused to enforce the law as it stands."

Ontario Liberal government -- which is suing tobacco companies over health-care costs associated with smoking -- won't even crack down on two shacks that are operating on government property in Caledonia, said Conservative Toby Barrett.

The community near Hamilton is home to a former housing development occupied by First Nations protesters who say the land belongs to them.

"It's literally right in front of their nose."

There's a theory that police are simply following government orders and condoning the illegal activity to avoid a confrontation with First Nations, he added.

But Ontario Attorney General Chris Bentley insists the province is tough on contraband cigarettes and is working with its counterparts in Ottawa and the United States to fix the problem.

"What you have seen over the past year is a greatly increased action in terms of enforcement of the various rules that exist," he said.

"So we'll be speaking more completely to the next steps in our approach in the months to come."

Kormos argues there's a "stunning" lack of enforcement that is jeopardizing the health of minors who are getting hooked on contraband cigarettes.

"It's not hard to identify vehicles leaving so-called smoke shacks and identifying which ones are most likely to have trunkfuls of illegal tobacco and illegal cigarettes and simply busting them," he said.

The proposed class-action lawsuit, filed Oct. 29 in Federal Court on behalf of all tobacco producers, is similar to another suit filed last year in Ontario Superior Court by the same group.

That suit named both the federal and Ontario governments.

John Finley, a lawyer representing the plaintiffs, said his clients plan to continue action against the provincial government. But it's not yet clear whether that will require pursing the suit that has been filed in Ontario court.

Neither lawsuit has been certified as a class action.