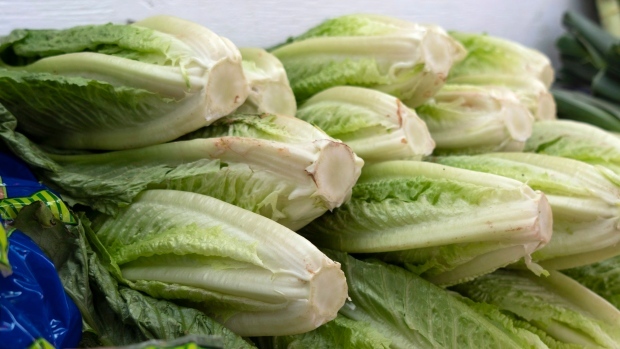 Romaine lettuce is linked to an E coli. outbreak across Canada.

OTTAWA -- The Canadian Food Inspection Agency has tested more than 2,000 samples of fresh lettuce and packaged salads but it hasn't found produce containing the bacteria in its search for the source of an E.coli outbreak.

They do suggest if it's present it is at very low levels, she said.

Three more cases of E. coli were confirmed in Ontario and Quebec Friday, bringing the total number since mid-October to 22: one in New Brunswick, four in Ontario and 17 in Quebec.

Eight patients were hospitalized, and one developed a type of kidney failure found mostly in patients with E. coli. The youngest patient is five and the oldest 93 years old.

Many people who get sick in most outbreaks never seek medical attention so the number of cases is never known, said Howard Njoo, Canada's deputy chief public-health officer.

He said experts tracing patients' food histories found most patients who became sick had eaten romaine lettuce in the days leading up to their illness.

Tracing a person's food history involves interviewing them about what they ate and where, Njoo said.

He also said it involves obtaining things like grocery store loyalty cards to help confirm what was specifically purchased and when.

The agency is recommending people in those provinces not eat romaine lettuce and throw out any they still have in their fridges.

It is stopping short of recalling romaine lettuce or telling retailers to pull it from their shelves.

Njoo said evidence right now is not connecting the outbreak to any particular product but if that changes the Canadian warnings will as well. Several retailers have voluntarily yanked romaine off their shelves in the meantime.

The Centers for Disease Control and Prevention issued a much more broad warning on Tuesday, saying Americans shouldn't eat romaine anywhere in the United States and restaurants should stop serving it.

It also said retailers should pull it from their shelves.

There are now 32 confirmed cases of E. coli in 11 states and on Friday, the commissioner of the U.S. Food and Drug Administration said that the romaine implicated likely comes from California because of growing and harvesting patterns.

Canadian companies can make their own assessment about whether to continue to sell romaine, Dimitri said Friday.

Njoo also said the most recent illness began on Nov. 1 but a delay in reporting meant the agency didn't find out about it until this week.

The shelf life of romaine is four to five weeks, he said, adding this is why the agency is still warning people to throw the lettuce away.

This is at least the third outbreak of E. coli linked to leafy greens in the United States and Canada in the last two years.

The current outbreak has the same DNA markers as the E. coli strain in November and December 2017 connected to leafy greens in the United States and romaine lettuce in Canada.

In that outbreak, 42 cases of E. coli were reported in Canada in Ontario, Quebec, New Brunswick, Nova Scotia and Newfoundland and Labrador. Seventeen people were hospitalized and one person died.

The cause of contamination was never identified in that outbreak although romaine lettuce was eaten by many patients before they got sick.

Earlier this year, about 200 people in 35 U.S. states fell ill with E. coli linked to romaine lettuce grown in Arizona but that strain of E. coli is different than the one being seen in the outbreak this fall.