At each location, members stood silent at 3 p.m. for three minutes — one minute for each woman — 54-year-old Christine Mandegarian, 59-year-old Sharon Roberts and 51-year-old Arlene Reid

“Enough is enough. Every single person that goes to work should return home to their family healthy,” Service Employees International Union (SEIU) President Sharleen Stewart said shortly after the three minutes of silence.

Provincial data shows more than 1300 staff at long-term care homes in Ontario have contracted the virus since mid-January.

“There are no words to really express what we’re feeling. Our hearts hurt and we miss our mom so, so, so much,” she told CTV New Toronto.

Bryden said the family is thankful their mother is being recognized by her colleagues and doesn’t want anyone else to lose a parent the way they did.

She said her mother stopped working April 13 and talked about having a lack of personal protective equipment (PPE).

“It shouldn’t take a pandemic for us to realize, and lives lost, families distraught that there’s not proper equipment for these workers who are essential to long term care homes,” Bryden said. 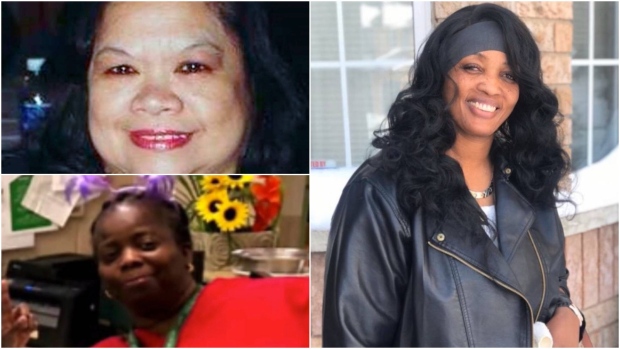 Call for public inquiry into deaths of residents and frontline workers

SEIU is calling on the Ford government to launch a public inquiry to investigate the deaths of residents and front-line workers.

“Because we have to ensure going forward we’re ready, we should have learned from SARS and now and through this, an inquiry, I’m hoping orders are put down to prepare for the next one,” Stewart said.

She said members want better disinfection and stronger protocols and that preparations are needed in case there are other spikes of the virus in this pandemic.

Ontario Premier Doug Ford’s office told CTV News Toronto Tuesday, there will be time to address cracks in the system at a later date but right now its focused on the immediate crisis.

“We’re pulling out all stops,” Ford said at his daily press briefing with reporters.

“Everyone is doing everything in their power to make sure that people in long term care have sufficient PPE. When they call, they get it. We have been able to move some hospital staff, front-line health-care workers to long term care, we’ve called in the military,” he said.