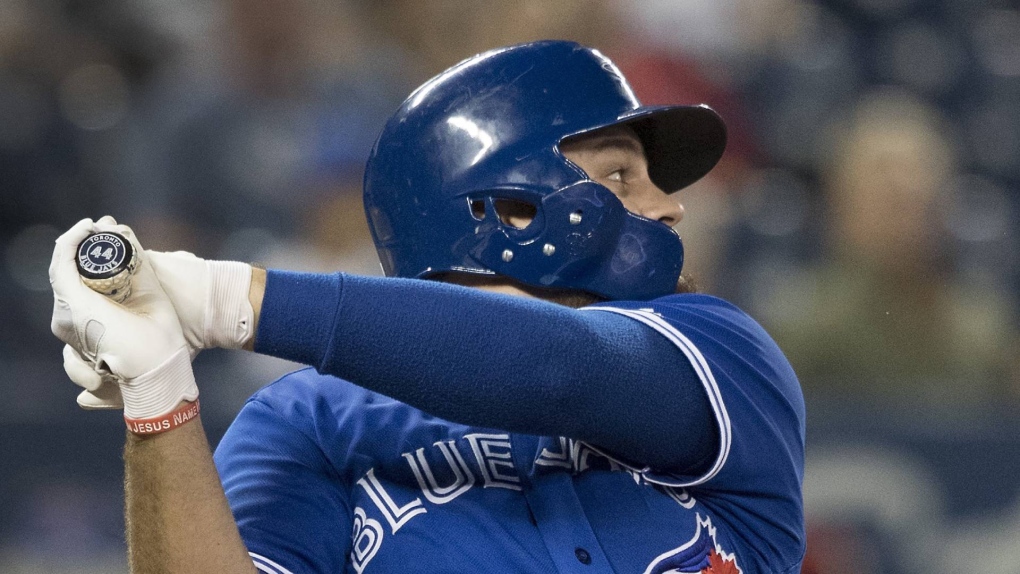 Toronto Blue Jays' Rowdy Tellez hits a home run against the Baltimore Orioles in the sixth inning of their American League MLB baseball game in Toronto on Wednesday, September 25, 2019. THE CANADIAN PRESS/Fred Thornhill

Waguespack pitched six scoreless innings, putting up a much-needed quality start after back-to-back days of strenuous work from the Toronto bullpen, and the Blue Jays beat the Baltimore Orioles 3-2.

"I'm pleased that I could go get outs and still give our team a chance to win -- that was my goal going in," said the rookie right-hander, who threw at least six shutout innings for the third time this season.

"Our bullpen has been taxed and exhausted over the last couple days so I really wanted to go out and give our team a chance to win and save our bullpen."

Manager Charlie Montoyo had used 10 pitchers in Monday's 15-inning game and eight Tuesday after scheduled starter Anthony Kay was scratched late due to back pain.

Waguespack (5-5) was efficient in his six innings Wednesday night, scattering just four hits with a pair of walks and five strikeouts. He threw 78 pitches, 45 for strikes.

"It was a gutsy performance because he didn't have good stuff," Montoyo said of his starter. "He was throwing 89, 88, but his secondary stuff was good so that's how he found a way to go six innings, which is what we needed.

Rowdy Tellez provided most of Toronto's offence with homers in back-to-back plate appearances to reach 21 on the season.

Tellez hit his 20th in the fourth inning off Baltimore starter Gabriel Ynoa (1-10) to give the Blue Jays a 2-0 lead, then went deep again off reliever Paul Fry in the sixth for his third career multihomer game.

"It's pretty special, one of those things people dream of and work hard to do," Tellez said of reaching the 20-homer mark in a season. "But I couldn't be more grateful to be in the position I am with the organization I'm with and just everybody's that's got me to this point."

Montoyo said Tellez had promised a young boy who had visited the Toronto clubhouse earlier in the day that he would hit a home run for him.

"I'm not going to compare Rowdy to Babe Ruth but he promised a kid that he was going to hit a home run and he hit two. That was pretty cool," Montoyo said. "The kid had heart problems before and he was in the clubhouse today."

The boy got a tour of the clubhouse from Tellez and played catch and stretched on the field with the rest of the team before the game.

Tellez recalled his promise a bit differently than Montoyo did, though.

"I promised him three and I failed," Tellez deadpanned. "But it was a special moment for us."

Billy McKinney also homered Wednesday, putting Toronto (64-94) up 1-0 in the first inning on the second pitch he saw from Baltimore starter Gabriel Ynoa (1-9).

Rio Ruiz earned an RBI on a bases-loaded groundout off Canadian reliever Jordan Romano. And Wilmer Font, Romano's replacement, walked in a run before getting a deep fly out from Chris Davis to end the inning.

Ken Giles struck out all three batters he faced in the ninth for his 22nd save.

Cavan Biggio walked in the third inning to extend his on-base streak to 26 games, one off Russ Adams' rookie record from 2005.

NOTES: Toronto recalled right-hander Yennsy Diaz and selected the contract of right-hander Ryan Dull before the game in an effort to shore up its depleted bullpen. Outfielder Lourdes Gurriel Jr. (appendectomy) was placed on the 60-day injured list to make him for Dull on the roster. ... Attendance was 13,853. ... The Blue Jays won the season series versus Baltimore 11-8. ... Toronto has the day off Thursday before hosting Tampa Bay from Friday through Sunday in their final series of the season.

This report by The Canadian Press was first published Sept. 25, 2019.