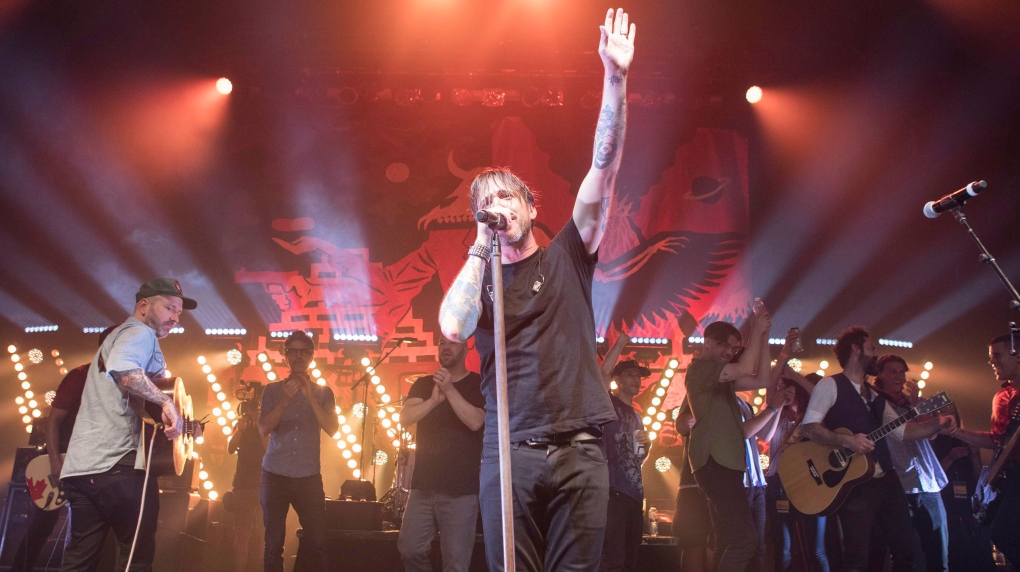 Benjamin Kowalewicz, lead singer of Billy Talent, stands on stage with other guest performers as they thank the crowd at the Danforth Music Hall, in Toronto on Saturday, August 11, 2018, as part of a benefit concert, organized by the band to raise money for the victims of the Danforth Shooting. THE CANADIAN PRESS/Chris Young

TORONTO -- A young victim of the mass shooting in Toronto's Greektown neighbourhood was among the crowd at a benefit concert held Saturday night to raise money for those impacted by last month's violence.

Samantha Price, a recent high school grad, said she was on Danforth Avenue eating ice cream with 18-year-old Reese Fallon and some other friends on the night of July 22 when a gunman opened fire into crowded restaurants and patios.

A bullet pierced Price's upper thigh, she said, and her friend Fallon was killed. Ten-year-old Julianna Kozis was also killed and 12 others were injured before the gunman ended his own life.

Price, still on crutches, and accompanied by her father, Ken Price, returned to the Danforth Saturday night to attend the concert organized by Canadian rockers Billy Talent, who have a studio just steps from where the shooting happened.

The mood at the concert was one of celebration and kinship, but it was also punctuated by solemn moments as the various musicians paused on stage to remind the enthusiastic audience, and themselves, why they were there.

Tickets cost about $50 and the venue's 1,500 seats were sold out, with proceeds from the show to be donated to the .TorontoStrong fund.

Ken Price appeared on stage after City and Colour performed, to thank the audience for supporting the shooting victims. As Samantha looked on from the balcony level, he also thanked the first responders who tended his daughter's wounds.

"Sam is lucky, she will get to recover and attend university, but all of us will carry this forward," he said.

After leaving the show Samantha, who will begin studies at Western University in the fall, indicated that her recovery has been a "roller-coaster" process.

"There are ups and downs every day, but I'm recovering pretty well," she said, adding that returning to the Danforth area was an emotional experience.

"I'm overwhelmed but I'm amazed at the amount of love the community has shown," she said.

Finger Eleven kicked off the show following a rendition of Leonard Cohen's "Hallelujah" performed by local singer Alexander Stewart, 18. He also performed the song a day earlier at the opening of the area's Taste of the Danforth Festival.

Maestro Fresh-Wes hyped up the crowd performing some old hits including "Let Your Backbone Slide," while Toronto band Pup had concert-goers crowd surfing to their music. Pup lead singer Stefan Babcock even plunged into the crowd himself, delighting those near the front of the stage.

But it was when Billy Talent appeared to begin their set with "Devil In A Midnight Mass," that the crowd really made it clear who they'd been waiting for.

The band also performed "White Sparrows," which lead singer Ben Kowalewicz noted they don't usually do. The song's lyrics, which discuss the tragic death of a woman, served a poignant reminder to the audience about the shooting victims.

At one point during the set Kowalewicz climbed on top of a speaker to talk to the crowd, that included Toronto Mayor John Tory.

"We love this city," he said, adding that the band knew it had to do something in the wake of last month's terrible tragedy.

"We need to stand up and make sure the rest of the world, and let the community, and let the Danforth, and let the city of Toronto know that we are a people of love, compassion and kindness," he said. "Take this feeling from tonight, and when you leave these doors, remember the feeling of tonight and pay that forward."

In closing the show, all of the musicians gathered on stage to perform a rendition of The Tragically Hip's "Bobcaygeon."

Later, outside the venue, Yasmin Afshar, 23, said that hearing Ken Price talk about his daughter really struck a chord.

"I think it really touched everyone," she said, adding that music has a way of bringing people together.

"Any event you go to in Toronto, you realize how many people are here, with you, supporting you."