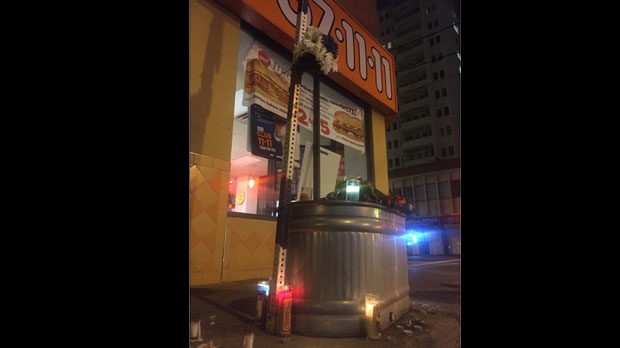 A memorial is growing outside a Pizza Pizza on Weston Road where a teen was shot and killed on Sunday morning. (Ken Enlow/ CP24)

A 17-year-old boy fatally shot inside a pizza shop over the weekend was “well-liked’ and “respected,” according to a letter sent home to parents by the principal of the Etobicoke school the teen attended.

Jarryl Hagley and three friends were eating at a Pizza Pizza near Weston Road and Lawrence Avenue when gunmen rushed into the restaurant and started shooting at around 1:40 a.m. Sunday, police previously said.

Hagley, who was struck by the gunfire, rushed to a back washroom where investigators said he collapsed and lost consciousness.

The teen was taken to a local trauma centre, where he was later pronounced dead.

In a statement issued Monday afternoon, the head of the Etobicoke Year Round Alternative School described Hagley as a “personable young man.”

“Jarryl’s infectious smile and daily presence will be sorely missed by our students and staff,” principal Denis Lopes said.

“What is most important is that we care for and support one another,” Lopes continued.

He said that space had been set aside within the school for students to “reflect and remember their friend.”

To date, police have not released any suspect information in connection with the incident, but said they will be reviewing video surveillance footage from the fast-food restaurant today.

“I do expect very good images of the incident and the suspects.”

The motive for the shooting has not been determined but Worden said police believe the suspects had prior contact with the victim and his friends.

Speaking to CP24 Sunday, Hagley’s stepmother Trisha Samuels described the teen as a “kind” and “loving” boy who leaves behind three young brothers.

“It hurts them to know that their brother is not here right now," she said.