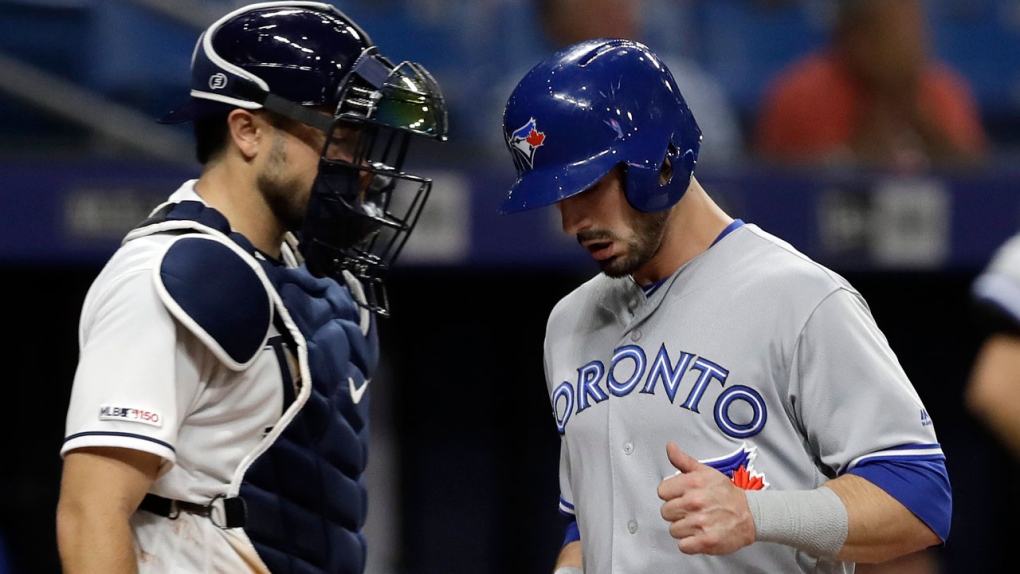 The second-place Rays won for the fourth straight time, improving to a season-best 13 games over .500 before an announced crowd of just 5,786 -- smallest ever for a Rays home game at Tropicana Field.

The Blue Jays have dropped six of their past seven games and fell to 0-8-1 in their series against Tampa Bay, dating to August 2017.

Meadows hit his 12th homer of the season, a solo shot to right field off reliever Thomas Pannone in the seventh inning. He also homered Sunday at Cleveland and Monday during an 8-3 victory over Toronto.

Avisail Garcia had an inside-the-park homer off Clayton Richard (0-1) in the third and also scored on a first-inning sacrifice fly.

Meanwhile, the Rays bullpen -- beginning with opener Ryne Stanek -- limited the Blue Jays to four singles and a pair of doubles.

Ryan Yarbrough (4-1) pitched 3 2/3 innings for the win, working out of a jam after Justin Smoak singled and Rowdy Tellez doubled to begin the Toronto fourth. Chaz Roe, Emilio Pagan and Diego Castillo, who yielded two hits and Brandon Drury's sacrifice fly in the ninth inning, finished up.

Tampa Bay used an opener for the 17th time this season. Stanek has made 15 of those starts, holding opponents scoreless in 13 of those outings.

Yarbrough, meanwhile, continued to prosper in what's become his customary role of following an opener. The 27-year-old left-hander led major league rookies with 16 victories last season, 14 of them as a reliever.

Richard, acquired from San Diego in an off-season trade, made his second start for Toronto after beginning the season on the injured list (right knee). He allowed two runs, three hits and four walks over four innings -- the biggest blow Garcia's routine fly that dropped behind right fielder Randal Grichuk and rolled to the wall.

Garcia, who singled in the first and scored on Travis d'Arnaud's sacrifice fly, circled the bases for the first inside-the-park homer of his career.

Blue Jays: RHP Aaron Sanchez, who left Monday's series opener with a finger injury, will throw a side session Thursday or Friday before a decision is made on whether he'll go on the injured list or remain in the rotation. ... A flu bug has affected several Blue Jays the past week, including INF Cavan Biggio, who was not in the lineup Tuesday.

Rays: C Mike Zunino (left quadriceps strain) started a rehab assignment with Class A Charlotte and will have his status evaluated this weekend. ... INF Matt Duffy, out all season with a strained left hamstring, will see a specialist Wednesday. ... INF Yandy Diaz still felt some discomfort in his bruised left hand during his first batting practice session. He plans to hit again Wednesday.