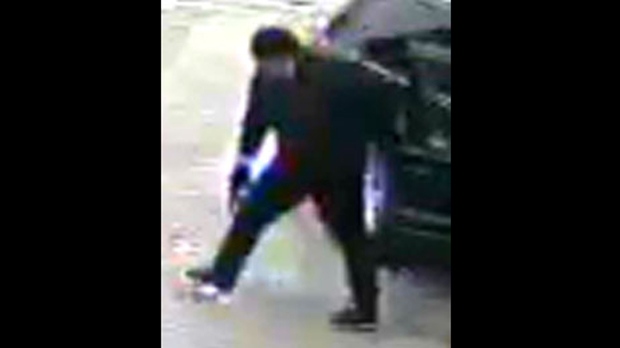 A suspect wanted in relation to the shooting death of 28-year-old Mila Barberi is shown in a surveillance camera image. (YRP)

York Regional Police are working to identify a suspect wanted in connection with the fatal shooting of a 28-year-old woman in Woodbridge earlier this week.

According to investigators, police responded to reports of a shooting in the parking lot outside of a commercial building on Caster Avenue in the area of Weston Road and Highway 7 at around 4:15 p.m. on Tuesday.

Upon arrival at the scene, officers located a male victim and an unresponsive female victim both suffering from gunshot wounds.

The female victim, Mila Barberi, 28, was rushed to hospital where she later died of her injuries.

A second victim, a 40-year-old man who has not been identified, sustained minor injuries in the shooting and has since been released from hospital.

Investigators said in the news released issued on Thursday that they have been interviewing witnesses and will follow up on information gathered through this process. As well, they are asking for anyone else that was in the area at the time to contact police

“Any additional witness that may have seen or heard anything in the area of Caster Avenue leading up to, or following, the shooting are asked to contact police,” the news release said. “Investigators are also appealing to any nearby businesses or residences that may have video surveillance to please come forward.”

The suspect has been described as an approximately six-foot-two male weighing 250 pounds. At the time of the incident, he was wearing a dark jacket and his face was covered. As well, police said the suspect arrived at the scene in a dark-colored Jeep Grand Cherokee.

After the shooting, York Regional Police said the shooter fled the area westbound on Caster Avenue.

York Regional Police have released a photo of the suspect and a video of the vehicle involved in an effort to identify him.

Police have not commented on the motive behind the shooting but said they do not believe this was a random attack.