Suspect in killing of Muslim family in London, Ont., may have accessed neo-Nazi site on dark web: documents

Suspect in killing of Muslim family in London, Ont., may have accessed neo-Nazi site on dark web: documents 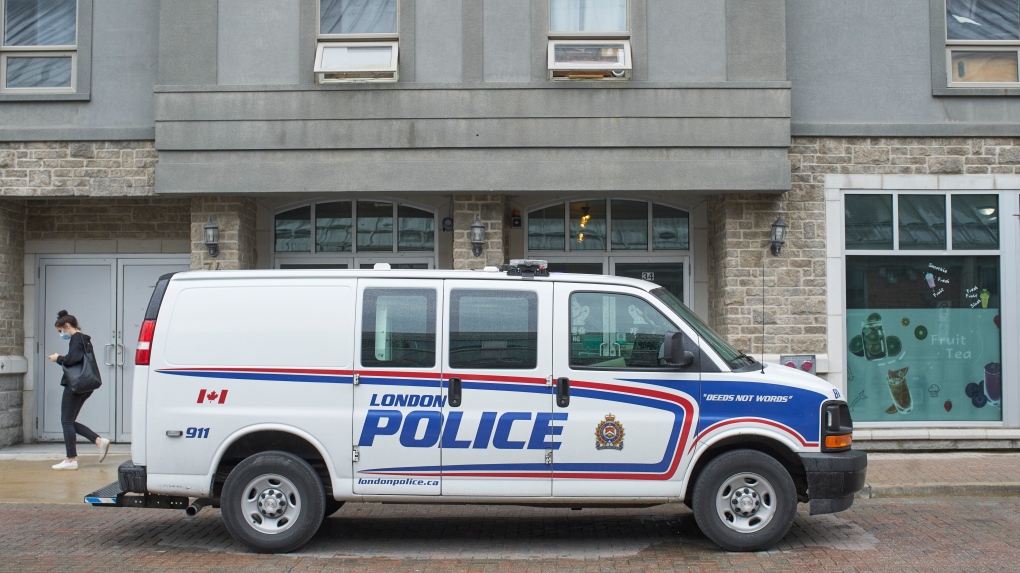 A police van sits outside of an address in London, Ont. on Tuesday, June 8, 2021. The address is linked to Nathaniel Veltman, the suspect in the murder of four members of a Muslim family on Sunday. THE CANADIAN PRESS/ Geoff Robins

New court documents revealed to media that the 20-year-old man accused of killing a Muslim family in London, Ont., had what appeared to be "hate related material" on a device and may have consumed white supremacist content on the dark web.

Nathaniel Veltman was charged with four counts of first-degree murder and one count of attempted murder in the aftermath of a vehicle-ramming attack that killed three generations of a family that was out for a walk on June 6, 2021. Roughly a week after the initial charges were laid, prosecutors also laid terrorism charges against Veltman.

The victims were identified as 46-year-old Salman Afzaal, his wife Madiha, 44, their 15-year-old daughter Yumnah and Salman's 74-year-old mother, Talat. Nine-year-old Fazey Afzaal survived the attack and was hospitalized with serious injuries.

The documents in question were Information to Obtain (ITO) applications, which police file to judges in order to request a search warrant. The ITOs were made public on March 15 after a ruling from a judge, although parts of the documents remain under a publication ban.

Investigators had filed two ITOs in which they sought access to the Dodge Ram pickup truck involved in the attack as well as several of Veltman's electronic devices.

Both ITOs indicate that investigators were looking for evidence of “motive and planning” in the early days of the investigation, as well as his “state of mind."

"This evidence will also assist in corroborating VELTMAN'S statement," the ITO reads. But what Veltman told police in the statement is still covered by a publication ban.

The public part of one of the ITOs described how police found several passwords and a URL written on a piece of paper. The URL in question was a dark web address, meaning that it was an encrypted site accessible only through the Tor browser and is a near identical match of a dark web address that once was used by the neo-Nazi website Daily Stormer.

Addresses on the dark web use the ".onion" domain rather than ".com" or ".ca." The dark web allows users to browse the web anonymously without their IP address being tracked. The anonymity that the dark web offers makes it a popular tool for those wishing to access illegal services as well as extremist content.

Police also seized several USB flash drives along with two smartphones, a laptop and an external hard drive. They found that the Tor Browser, a web browser used to surf sites on the dark web, was installed on a laptop, as well as desktop shortcuts to launch the browser.

Most of the details of the files that were found on the devices remain under a publication ban, but police noted that some of the documents on one of Veltman's devices "appeared to be hate related material and relevant to the listed offences."

Investigators also sought access to several of Veltman's online accounts, such as Google, Microsoft, Facebook and Snapchat. Around 68 usernames and passwords for various online accounts were stored on the laptop.

Several weapons were also included in the ITO's list of items to be searched for, including a machete, a camouflage pocketknife, a large serrated knife, an airsoft gun, and an axe.

In Veltman's apartment, police said they found another lined piece of paper with speeds and percentages seized from a kitchen table.

The ITOs also shed some light into Veltman's past. Investigators indicated that he was not known to the RCMP at the time of his arrest. Police also said Veltman was homeschooled until Grade 10 and had few friends.

The release of these ITO came after CTV News and several other media organizations sued to make them public. On March 7, an Ontario judge rule that the two ITOs may be released, with some portions of the two documents remaining under a publication ban.

In both ITOs, investigators argued that releasing the documents to the public could undermine the accused's ability to receive a fair jury trial, citing the large amount of media attention the case received.

"Due to the hate crime aspect and horrific and public nature of this crime, this investigation has generated significant public discourse on social media. Public debate can be positive, but not always.

"A debate on social media can lead to the public prosecution of VELTMAN without all the facts fully tested at trial," the ITO reads.

Police also cited how one reporter had posted a screenshot of Veltman's Zoom court appearance on his Instagram account, despite the fact that it is illegal to share photographs or recordings of court proceedings in Ontario.

"If this becomes a public document now, I am certain it will be posted online," the ITO reads.

The FBI searched Donald Trump's Mar-a-Lago estate as part of an investigation into whether he took classified records from the White House to his Florida residence, people familiar with the matter said Monday, a move that represents a dramatic and unprecedented escalation of law enforcement scrutiny of the former president.

Helicopters have begun bringing essential supplies to southern Newfoundland towns cut off from the rest of the island by two out-of-control forest fires.

Some of the world's richest men are funding a massive treasure hunt, complete with helicopters and transmitters, on the west coast of Greenland.

Ashton Kutcher says he battled the debilitating disease vasculitis. Here's what it is

Ashton Kutcher revealed Monday he had battled a serious autoimmune disease that affected his hearing, sight and ability to walk for more than a year.