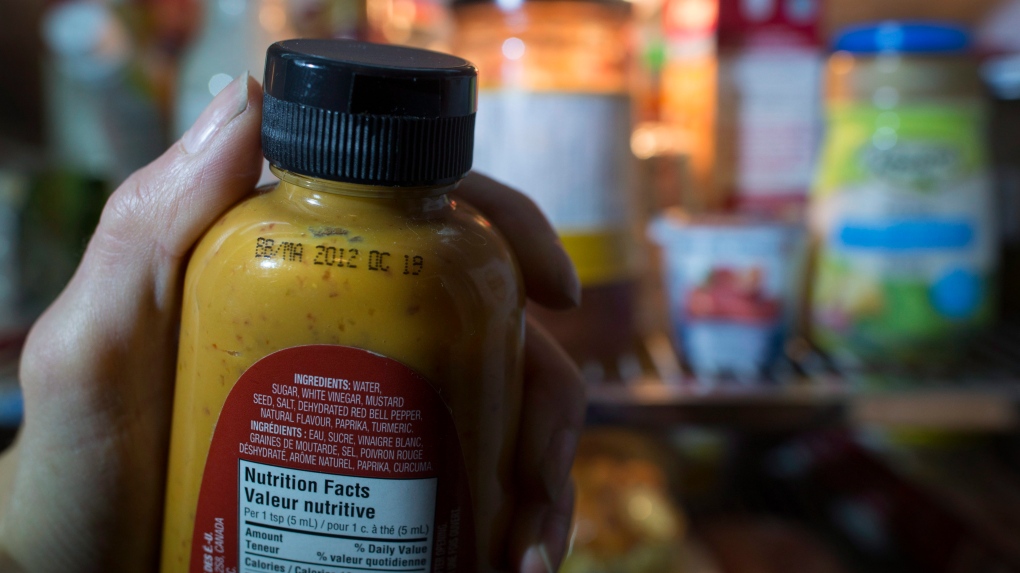 A bottle of prepared mustard condiment past its expiry date is shown in Toronto on Sunday, March 13, 2016. (Graeme Roy/THE CANADIAN PRESS)

Don't toss that yogurt cup even if it's a few days past its best-before date, says a national study on reducing Canada's colossal food waste.

The National Zero Waste Council says confusing and unnecessary best-by labels are a major cause of food waste in Canada.

"When they see 'best before' they think it means if they eat it afterwards, there's going to be a health problem. That's not true."

Research suggests Canadians are among the biggest food-wasters in the world. A recent study found every Canadian lost or wasted almost 400 kilograms of food a year. A lot of that waste -- 47 per cent -- happens at home.

The council has been considering how to reduce that waste since 2016. Its work has included 900 submissions from industry groups, governments, organizations and individuals.

Best-before labels emerged as major villains. People assume food past the date on a package is spoiled, Philippe said.

With the exception of products such as eggs, best-before dates refer to food quality, not safety. Many products that carry the dates don't even need them, she said.

"That chip might be slightly crispier if you eat it before that date and slightly less crispy if you eat it after. You would be amazed at how long that yogurt lasts."

Presentation and language are also ambiguous.

"Consumers have no idea of what it is they're looking at," Philippe said. "(A product) might say 'best before 1/3' and it's not clear whether that's January 3rd or March 1st.

"We don't have clarity around the text that's being used, the format of the date, the product that it's stamped on, nor the meaning of the word."

That means good food ends up in the kitchen garbage bin and the grocery dumpster.

"Perfectly good pallets of hummus are pulled just before their best-before date."

Canada needs to standardize dates and terms, Philippe suggested. That's already taking place in Europe and the United States, where labels are beginning to say "use by," "freeze by," or "tastes best by" to address safety and quality.

The report makes other recommendations.

It says governments should harmonize rules on food donations and food waste in landfills. Processors and retailers, where another 30 per cent of waste takes place, need better inventory control, it adds.

Packaging smaller servings for smaller households would help. So would avoiding consumption-based marketing such as two-for-one sales.

Retailers can market visually imperfect food at a discount. Unused food can be turned into other items. A British company, for example, brews beer from stale bread.

Business is behind the effort, said Cher Mereweather of Provisions Canada, an association of industry groups that participated in the council's study.

"If we're wasting product, then that drives down our profitability. There's also the environmental impacts. Then on the social side, if we have more food available to feed the growing population, that's a good thing," she said.

"What we're looking at is the need for clear language ... so the consumer knows 'expires by' means no longer safe and 'use by' means it's a quality standard."

The federal government has promised to cut food waste in half by 2030 and is writing a national food policy that will also tackle waste.

Philippe said her group will soon begin a national campaign to get people thinking about how to waste less of what they eat. But she knows change will take time.

"This issue is huge. It's global. It affects huge supply chains."

It affects everyone, said Mereweather.

"It's not easy. We need a shift in our mindset."