TORONTO -- An analysis of cremation data in Ontario has found a nearly 13 per cent increase in the number of deaths during the COVID-19 pandemic compared to the average based on previous years, and that COVID-19 deaths cannot account for all of the excess mortality.

The data was presented in a report released Wednesday afternoon by the province’s COVID-19 Science Advisory Table.

According to the report, there was an overall 12.8 per cent increase in the number of cremations per week compared to a baseline average from data taken between 2017 to 2019. The report describes these deaths as “excess mortality,” or rather the number of deaths beyond what would have been expected under normal conditions.

The greatest increases in excess mortality took place in April and May of 2020 and in January 2021—months that correspond with peaks in the first and second pandemic waves in Ontario.

The increase in deaths can be attributed to both COVID-19 and non-COVID-19 related causes, the report specifies.

The largest increase in mortality due to non-COVID-19 causes took place between March and May 2020 during the first wave of the pandemic, something the science table says could suggest that COVID-19 was “underdiagnosed as a cause of death” at the time in part due to lack of readily available testing.

“The subsequent increase in mortality due to non-COVID-19 causes could reflect the impact of delays in care for conditions other than COVID-19, including cancer, cardiovascular care, in addition to other indirect effects of the pandemic, such as the increase in opioid-related deaths,” the report said.

The science table also cites “several studies” that have shown a decline in the number of patients seeking emergency care during the pandemic due to hesitancy or fear.

“This trend is supported by data showing that Canadian emergency department volumes dropped by 50 per cent during March and April 2020,” the report says. “Further, deaths due to acute drug toxicity, suicides and violence secondary to the economic and social disruption of the pandemic have also been suggested as contributors to the increase in non-COVID-19 deaths.”

Between August and December of last year, when more testing for the novel coronavirus was available, confirmed COVID-19 deaths accounted for about 29 per cent of the 3,812 excess deaths. That percentage increases drastically in 2021, with 73.1 per cent of the 2,337 excess deaths between January and March being attributed to the disease. 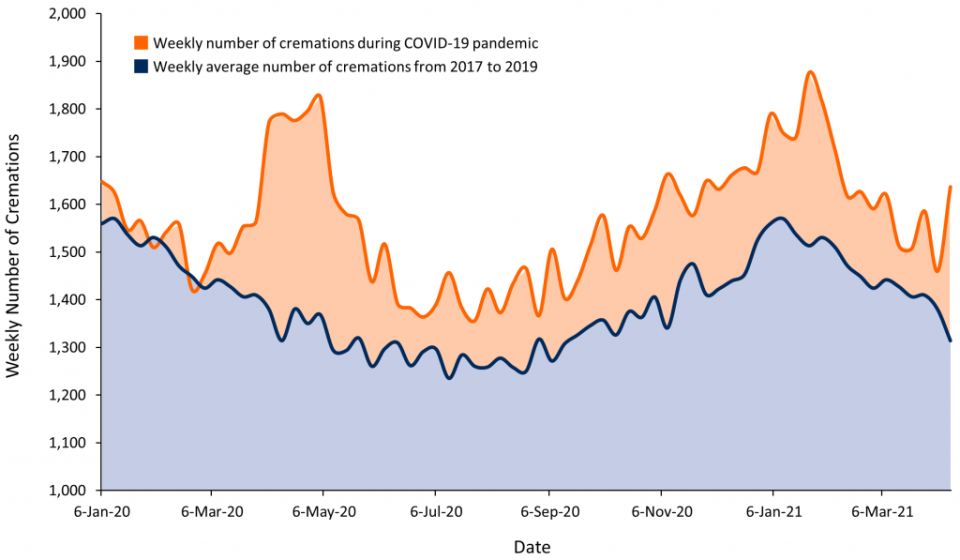 The data also showed that excess mortality spanned across all age groups during the pandemic.

Last year, the majority of the excess mortality can be found in people between the ages of 65 and 84. According to the data, there were 4,084 more cremations in 2020 than expected, representing a 12.6 per cent increase from the 2017 to 2019 average.

The largest increase in cremations, however, was in the youngest age group—people aged 44 and under. The data shows that in 2020 there was 848 deaths more than expected, accounting for a 27.8 per cent increase compared to the baseline.

That 65 to 84 age group continued to see the most excess mortality between January and March 2021, with 1,236 more cremations than expected. The aged 44 and younger demographic again saw the largest increase compared to previous years, with a 44.2 per cent jump (315 more deaths) compared to the same period in 2017-2019.

Cremations are chosen by about 70 per cent of Ontarians and according to the science table, there has been no change in the percent of people who chose to be cremated throughout the pandemic. That determination was made by comparing 2020 cremation data with 2020 mortality data from Statistics Canada.