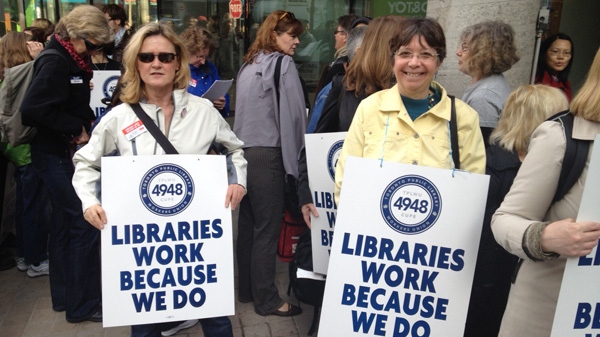 Toronto's bookworms came out to support the city's striking librarians at a "read-in and rally" on Sunday afternoon.

The union representing the librarians invited the public to read their favourite Canadian book at the Toronto Reference Library alongside the striking workers.

CUPE Local 4948, which represents about 2,400 workers from 98 library branches, also used the read-in as a chance to rally for their cause. Union president Maureen O'Reilly was joined by author Susan Swan and Greg Hollingshead, chair of The Writers' Union of Canada.

The librarians walked off the job last weekend after contract talks with the city fell apart, despite extensions to a proposed strike deadline. CUPE Local 4948 has accused the library board of making unrealistic promises when it agreed to budget cutbacks.

Librarians have been working without a contract since Jan. 1, as part of greater labour negotiations with other indoor workers in Toronto.