In the past six months, 10 people have lost their lives in what Ontario Provincial Police are attributing to a horrific pattern of “completely preventable” collisions involving “inattentiveness” from transport truck drivers.

So far in 2017, 67 people have died in 56 collisions involving transport trucks in Ontario.

OPP commissioner Vince Hawkes held a news conference on Thursday, alongside the family members of some of the victims, where he highlighted several “senseless crashes” on Ontario highways this past summer that share dangerous commonalities.

One of the deadly incidents happened on July 27, 2017 in Georgina, when a dump truck hauling gravel on Highway 401 failed to stop for traffic that had slowed near a construction zone. The driver of the truck slammed into the back of an SUV. Hawkes said the force sent the SUV into a cube van, which in turn crashed into a second stopped gravel truck.

A 34-year-old passenger of the cube van and a 44-year-old driver of the SUV were both killed.

Passengers in both vehicles, one of which was a 10-year-old boy, were airlifted to hospital with grave injuries.

A mere three days later, this time on Highway 401 near Chatham-Kent, a transport truck driver yet again failed to stop for slowed traffic near a construction zone.

A family of four was returning home from a camping trip in their pickup truck when the commercial truck rear-ended them.

The 45-year-old mother and her 14-year-old son were killed while her 39-year-old husband and 12-year-old son suffered serious injuries. 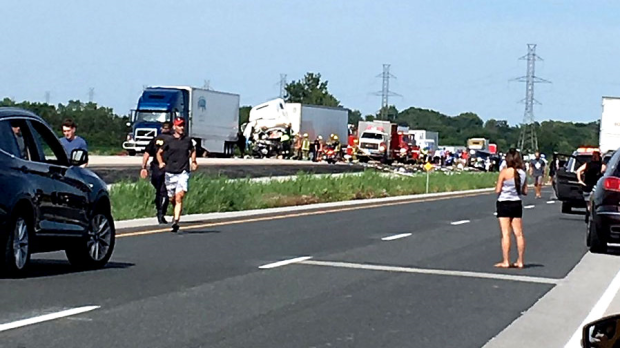 Traffic at a stand still on Highway 401 after two members of a family were killed on July 30, 2017. (Twitter/Lindsay Ducharme)

A few days later, on Aug 3, 2017, a man and his cousin were headed to a golf tournament for his dad’s birthday when a transport truck did not slow down for a construction zone on Highway 401 near Port Hope and crashed into them.

The vehicle burst into flames upon impact.

Twenty six-year-old Todd Gardiner and 35-year-old Michael Glazier were both killed in the crash. Two others were injured.

“Each of these collisions resulted in a catastrophic crash scene that claimed the life of more than one person. Collectively, they claimed the lives of 10 innocent human beings and injured several others. Each incident involved hours-long highway closures as police and emergency partners tended to the victims,” Hawkes said.

“But each of these resulted from inattentive commercial truck drivers. This is driver inattention at its worst. There is a tremendous cost to innocent men, women and children when a transport truck driver is not paying full attention to the road or is fatigued.”

Hawkes said many of these commercial vehicles travel up to 105 km/h “or more” on Highway 401 and can carry more than 132,000 pounds of goods at any time.

While he acknowledged that the spike in transport truck-involved crashes doesn’t speak for all drivers, noting many of which are the “safest drivers on the road,” Hawkes said their responsibility is “far greater” than other motorists because of the sheer size of their vehicles. .

“They have zero room for error, carelessness, negligence and poor driving behaviour of any kind,” he said.

“These people pose serious risks to our roads and have caused these victims to be here today because of their inattentive action,” he added, motioning to a group of tearful family members sitting in the audience.

Woman who lost sister in 2014 speaks out

One of those family members, Lynn Bevand, spoke about how a 2014 crash on Highway 400 near Barrie changed her life forever.

Her sister, Karron Derbyshire, was killed after a transport truck struck a van that collided with a guardrail and subsequently struck her vehicle.

The truck was reportedly carrying about 70,000 pounds of lumber.

“My world instantly collapsed. I had not only lost my sister but my best friend,” she said

“No one should have to take their dad to the hospital to say goodbye to their daughter.” 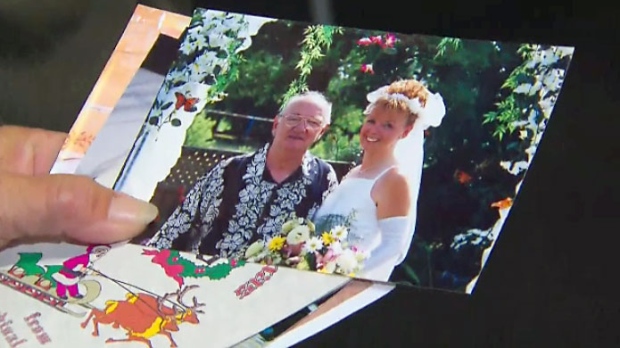 Karron Derbyshire on her wedding day with her father. (Photo provided by family)

Bevand said she and Derbyshire were “inseparable” and that today she would have celebrated her 54th birthday.

“In the words of my sister,” she said, “if you can’t do it safely, you shouldn’t be doing it.”

Hawkes said OPP are working on a strategy that will look at a “number of issues” on Ontario highways and that transport drivers should consider themselves “on notice.”

One of the tactics he said the force plans on implementing more often is the use of the OPP helicopter.

He vowed to pursue all investigative avenues related to highway crashes that result in tragedy and will hold negligent drivers accountable to the full extent of the law.

He added that collaboration is needed to curb the tragedy on Ontario highways but that part of the onus rests on the public.

“People have to be aware. If you see distracted driving -- all members of the public have to phone this in. If you see a transport truck that’s crossing lanes or going back and forth, we want to hear from you. We want the public to be involved. We can do our part from a policing perspective but we add the public, technology, the Ministry of Transportation and the trucking industry. We need everybody to be involved in this so we prevent this from happening,” he said.

“So we don’t have to sit in a room here with victim’s families, because all of these were preventative… every one of them.”

Nicolle McGee gripped a photo of her would-be fiancé Todd Gardiner while describing what the couple had planned for their future.

“We were living together and saving for a house,” she said. “We were all pushing forward to our futures and we had everything pretty much planned out. And now of course, everything’s gone.”

Gardiner was travelling with his cousin Mike Glazier to play in a golf tournament for his dad’s birthday when a transport truck failed to slow down for a construction zone and hurtled into their vehicle.

McGee found after Gardiner’s death that he planned on proposing to her on Christmas Day while surrounded by his family.

“Todd knew that his family was number one. He wanted to do everything with his family so he was going to wait until Christmas to surprise his mom because he knew she’d be so excited that he proposed,” McGee said.

“That was something I missed out on.” 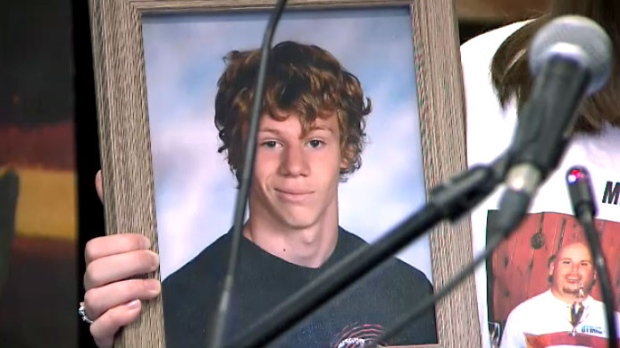 Nicolle McGee holds a photo of Todd while she speaks with reporters at a news conference on highway traffic fatalities.

In the days following the crash, McGee said she was hurt by how quickly their deaths passed through the news all while her family just started their lifetime sentence with grief.

She said she decided to attend the news conference today to show “what actually happens to people after a crash like that.”

“As much as the news wants to talk about the accidents that have happened, the real thing is how we are impacted and how the victims were impacted, that’s what should be the focus,” she said.

“So when they talk about who was killed in those accidents, yes Mike and Todd were killed, but along with them, so were we.”

The drivers charged in connection with the fatal collisions from this past summer are as follows: