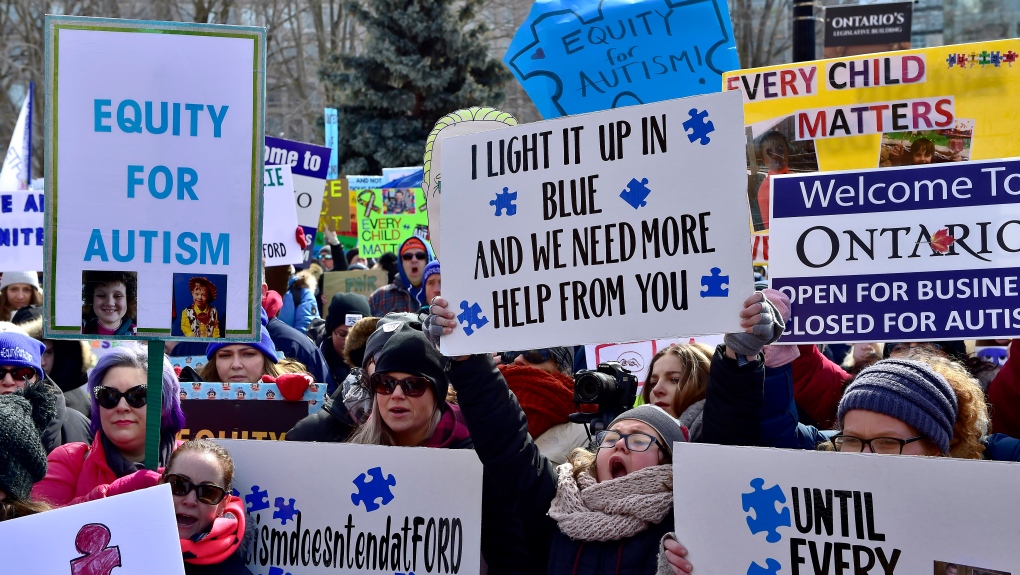 Hundreds of parents, therapists and union members gather outside Queen's Park, in Toronto on Thursday, March 7, 2019, to protest the provincial government's changes to Ontario's autism program. THE CANADIAN PRESS/Frank Gunn

Ontario has enrolled 888 children with autism in core therapies -- adding just 30 to the government's revamped program since April -- but insists it will meet its goal of enrolling 8,000 kids by the end of the fall.

Government officials, speaking on background in a technical briefing, said recently that movement has been slow over the past few months due to a new intake process that as of late July is now up and running, and they believe those numbers will start to grow exponentially.

But they are puzzled by a relatively low response rate to letters they have sent to families inviting them to register with the independent intake organization, the first step in the new process for children to get government-funded therapy.

Angela Brandt, president of the Ontario Autism Coalition, said the government need only look to its history with the autism program to explain the lower-than-expected uptake.

"Part of the reason is that everybody's lost trust," she said in an interview. "It's four years later, and there's still no program."

The Progressive Conservative government announced in early 2019 that it was going to "clear the wait-list" by giving families either $20,000 or $5,000 to pay for therapy, depending on the age of the child.

But parents were furious and held waves of protests, since intensive therapy can cost upwards of $90,000 a year. The government funding was too small to amount to anything meaningful for higher-need children and services to help teach basic skills should be determined by need, not age, they said.

The government ultimately scrapped the program and went back to the drawing board. The next minister on the file then announced a new, needs-based program with a doubled budget, but conceded in December 2019 that it would be phased in over two years instead of being fully up and running by the following April.

Merrilee Fullerton is now the third minister of children, community and social services in four years, and said the rollout of the needs-based program was "progressing well."

"I strongly encourage families to respond to their invitations and enrol," she wrote in a statement. "We have a large, dedicated team to support families through this process, and are all working to ensure continued progress."

There are more than 54,000 children registered in the program and waiting for core services. The autism community has been protesting delays of the program's rollout by saying "50k is not OK." Some of those children have been waiting for seven years.

But the government disputes that framing, saying the number doesn't represent the wait-list because about 40,000 kids have received something. That includes interim one-time payments and an entry-to-school program, but many families say what their children really need is core clinical services.

About 600 families were enrolled in a pilot phase of the new core clinical services program starting in March 2021, and by the end of April 2022, the number grew to 858. There are also children receiving therapy who were grandfathered in from the previous Liberal program.

The government has sent about 6,300 letters to families, officials said, inviting them to register with Access OAP, the new intake portal. They are going in order of registration, meaning they are starting with children who first sought therapy as far back as 2015.

Another 5,000 letters are set to go out at the end of August. But so far, the response has been lower than officials had expected.

Fewer than 1,700 families have responded to the letter and registered with Access OAP, officials said. The next step is for Access OAP to issue invitations for families to participate in an interview to determine their child's level of need, and almost 300 of those have gone out.

Of those 300 children, 30 have been enrolled in core clinical services, officials said.

Officials say they see an uptick in registrations when they reach out to families who haven't responded to the letter, and note that it's summer and people are busy. But, they concede, with some children waiting since 2015 or possibly longer, they may not even need the therapy anymore.

Monique Taylor, the longtime NDP critic on the file, said she heard of someone whose child is 17 and just received one of the letters.

"Families are obviously discouraged," she said.

"They're like, 'Well, this isn't going to do anything for me, so why would I bother?' I think it's incumbent on the government to follow up with families to find out the reason, and then to continue sending out letters so that families who will be eligible will actually be able to apply."

Brandt, of the Ontario Autism Coalition, said the government needs to be much more transparent to build trust with the community.

"(The ministry or the intake organization) needs to do some sort of community outreach to let them know what's happening," she said.

"There's a lot of people in the community that don't understand what's happening to the (Ontario Autism Program) and because this government isn't sharing what's going on, the community doesn't trust them."

This report by The Canadian Press was first published Aug. 13, 2022.