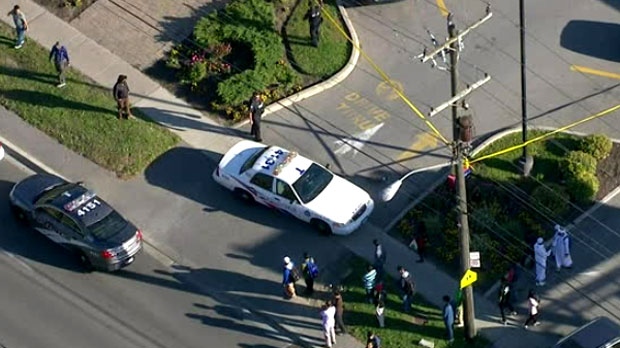 Police are seen on scene of a stabbing at a commercial plaza in Scarborough on Friday afternoon.

Police say a second suspect has been arrested after three teenage boys were stabbed near a high school in Scarborough last month.

On Oct. 20 at around 3:30 p.m., police say a group of boys were sitting on a wall in the area of Lawrence Avenue East and Rushley Drive when they were confronted by two males on a motorcycle.

Police say a male passenger on the motorcycle got off the bike and approached the teens.

According to police, the male produced a knife hidden under his clothing and stabbed one of the boys in the group.

The two other teens attempted to stop the attack but were attacked by a larger group of people who were with the motorcyclists.

Police say the two boys were held down and stabbed multiple times.

The two suspects on the motorcycle and the larger group then fled the scene.

The three teens were taken to hospital and two of the victims sustained life-threatening injuries.

Last month, a 17-year-old was arrested and charged with aggravated assault in connection with the incident.

On Sunday, police announced that a second suspect, identified as Mohammad Ilyas Patel, a 19-year-old Toronto resident, had been arrested in the case.

He has been charged with assault, assault with a weapon, possession of a weapon dangerous to public peace, and two counts of failing to comply with a recognizance.