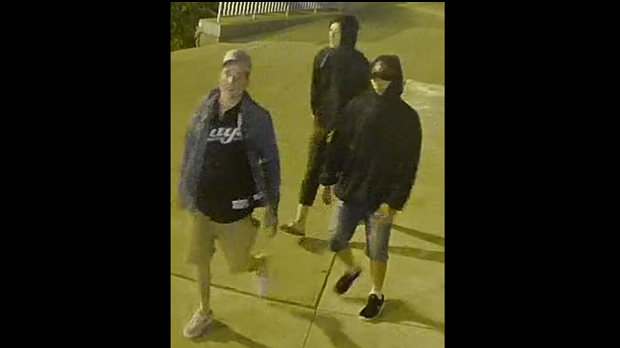 Police are searching for three men accused of vandalizing the roof of the Ripley’s Aquarium in July.

The men went to the aquarium, located at 288 Bremner Boulevard, in the early hours of July 9, police said.

They made their way to the roof and covered a large area with graffiti, according to investigators. They fled toward the Skywalk, a walkway that connects Union Station to the CN Tower and other various locations downtown. Police released a photo of three suspects in an effort to identify them.

Police said they couldn’t disclose what was written on the roof as it is still part of the investigation. Bystanders who were above the building looking down from nearby condos or from the CN Tower would have been able to see the writing, investigators said.

The three suspects were described by police as being men in their 20s. The first suspect was described as having dark, short hair and a large tattoo on his upper back. He was wearing a beige baseball cap, a long-sleeved light blue jacket, a black baseball jersey, beige shorts, one knee-high white sock, and white running shoes.

The third suspect was described as wearing a black hooded sweater, dark baseball cap with a logo, black and white running shoes, and denim knee-length shorts.