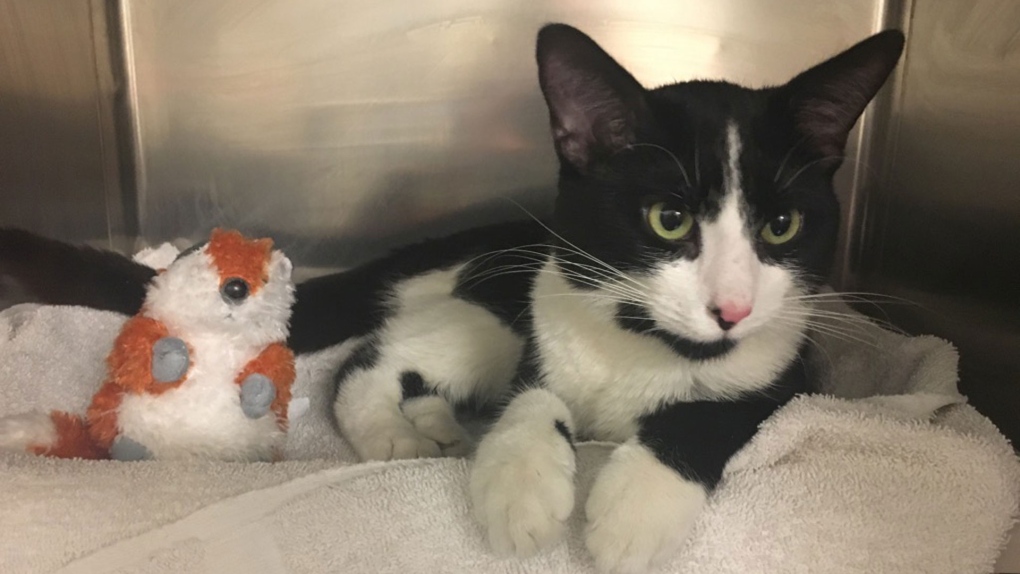 A cat is now safe after crews rescued it from the top of a Toronto hydro pole. (Jamie Gutfreund/CP24)

TORONTO -- Toronto Animal Services is still searching for the owner of a small cat that was rescued from the top of a hydro pole during a winter storm on Thursday.

The black and white feline was found by a couple near Dufferin and Bloor streets balancing at the top of a hydro pole around 8 a.m.

“We came back around to the alleyway and as soon as we came over she started crying and meowing at us,” Kristine Ball said on Thursday. “She is somebody’s cat and she is scared.”

After trying to coax it down with food, the couple contacted 311, Toronto Fire and Toronto Animal Services in hopes that someone would help. While emergency crews don’t generally respond to such calls, they made an exception due to the frigid weather.

A few hours later, an officer with Toronto Hydro went up with a ladder and managed to grab the cat, bringing it down to safety. 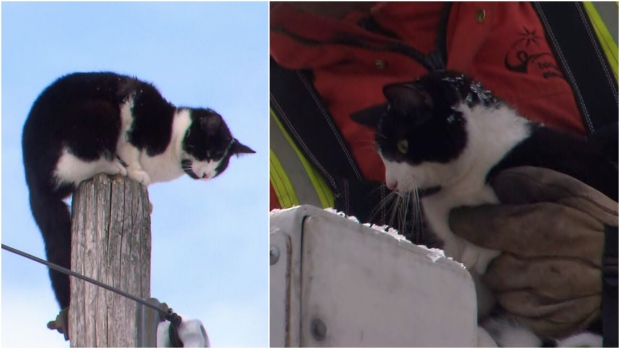 On Thursday, a spokesperson for Toronto Animal Services said that the one-year-old male cat is doing well, although they are still monitoring the animal for potential frostbite.

“He is happy, very affectionate,” the agency said. “Understandably, he is very hungry so he is eating well.”

“He is a sweet little guy.”

Toronto Animal Services has taken to social media to try and find the owners of the animal, but so far no one has contacted the shelter. The cat has not been neutered and does not have a microchip.

“He’s in good condition, but rather thin and understandably nervous,” the agency said on social media. “We don’t know how long he was up there, but think that he might have gotten lost, decided to climb, got disoriented from the storm and then didn’t have an exit strategy.”

Cat on a pole! This morning we got a call about a cat who was stuck on a pole in the Bloor and Dufferin area and couldn’t get down. Our poor friend was clearly cold and terrified, and snow was still coming down from last night’s storm. The amazing crew from Toronto Hydro got him down, and our Officers Amanda and Tonya brought him to safety and warmth. Our friend is about a year old, not neutered and not chipped. He’s in good condition, but rather thin and understandably nervous. We don’t know how long he was up there, but think that he might gotten lost, decided to climb, got disoriented from the storm and then didn’t have an exit strategy. We do not know if he has frostbite as that can take a few days to determine, but we’re hoping for the best. Toronto pet parents: if you’re missing your adventurous cat, we’ve got him - he’s safe, warm and eating our treats. We don’t have a name for him yet, but hear you’re all calling him #HyrdroCat and that name was trending on Twitter. Good enough for us! Come get Hydro Cat if he’s yours. 416-338-7297. If no one claims him, adoption may be an outcome we seek for him. Keep an eye on this page and on toronto.ca/adoptapet if you want your very own Hydro Cat. #cats #help #rescue #winter #snowto #toronto #cityofto #torontohydro #animalservices #animalcontrolofficer #catsofinstagram

The stray period for a cat taken in at a Toronto shelter is three days. At that point, it will go up for adoption. However, Toronto Animal Services said that the cat is still undergoing tests for an abnormality with its left hind leg and it will not be released for adoption until it is determined to be healthy.

According to Toronto Hydro, whose staff visited the cat on Thursday to check on its condition, the cat has been named "Everest."

Our famous #HydroCat got a visit from his rescuers at @TorontoHydro today! Thanks again to the crew, and to our staff Maria and Maddison, part of the team in the shelter providing care and snuggles. We’ve named our spunky feline Everest. Thanks to everyone who shared his story. pic.twitter.com/oFJ39UvOzc

Toronto Animal Services will be posting more photographs and videos of the cat to social media in hopes that its owner will come forward.

“If you’re missing your adventurous cat, we’ve got him,” one of their Twitter posts says. “He’s safe, warm and eating our treats.”