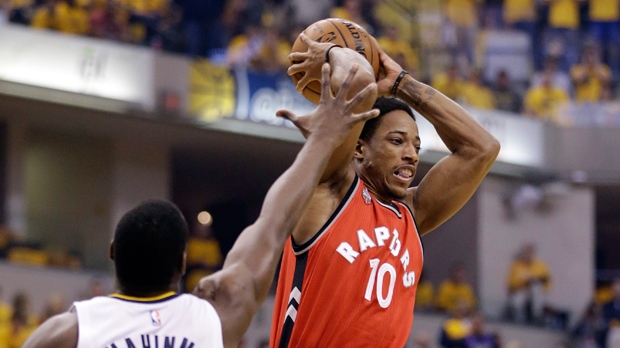 INDIANAPOLIS -- The Toronto Raptors' playoff series against the Indiana Pacers has come down to one game.

Paul George scored 21 points to lead the Pacers to a 101-83 victory over the reeling Raptors on Friday, that evened their best-of-seven opening-round series at three wins apiece.

Cory Joseph and DeMarre Carroll had 15 points apiece to top the Raptors, who had disappointing shooting nights once again from their all-stars DeMar DeRozan and Kyle Lowry.

Jonas Valanciunas had 14 points and nine rebounds. Lowry had 10 assists but just 10 points on 4-for-14 shooting. DeRozan had eight points on a 3-for-13 shooting night.

The Raptors roared out to an early 12-point lead, but by the end of a horrible third quarter, it had turned into an eight-point deficit, and they trailed 71-64 going into the fourth.

Then things got ugly in a hurry. The Pacers reeled off a lightning-quick 13-0 run to take a 19-point lead just over two minutes into the fourth quarter that had the hundreds of Raptors fans in attendance sitting in stunned silence.

Then it got worse. The Pacers continued to pour in one shot after another, to the delight of Pacers fans, and the Raptors seemed helpless to stop them. When George scored on a long jumper with 3:27 to play, it put the Pacers up by 26 points, and prompted fans to chant "U-S-A!"

The Pacers shot 46 per cent on the night, to Toronto's 36, and held a narrow 44-40 rebounding advantage over the Raptors.

Coming off last season's disastrous four-game opening-round sweep by Washington, the subtext all season long has been: Can the Raptors win a playoff series? The answer will come Sunday.

The Raptors have just one series win in their 21-year history, in 2001 versus the New York Knicks.

Coach Dwane Casey said his team wouldn't be distracted by thoughts of past post-season disappointments.

"Right now, today, the first quarter, second quarter, each possession, it's far more important," Casey said before tipoff. "That's what I try to get our players to lock in on, and not the heavy burden of history."

Once again, hundreds of Raptors fans made the trek from Toronto to Indy, "the heart of basketball country" according to the game announcer, a place steeped in basketball tradition.

Their presence made for a raucous atmosphere at Bankers Life Fieldhouse with duelling chants and non-stop noise. There was a smattering of boos before the singing of "O Canada." Large pockets of Raptors red broke up the backdrop of yellow Pacers T-shirts.

The Pacers took aim at Toronto's "We The North" slogan with their own "We The Gold" campaign, which was written on the yellow T-shirts given to fans, under the words "UNITED STATE OF BASKETBALL."

Casey had been preaching a strong start for Game 6 after woeful first quarters in Games 4 and 5. The Raptors were clearly listening, roaring out to a 12-point lead in the first quarter behind nine points from Carroll. The Pacers pulled to within 22-20 going into the second.

The Pacers tied it up midway through the second quarter, but the Raptors would go up by eight before taking a 44-40 advantage into halftime.

The Raptors' defence disappeared in the third, as they gave up 31 points to Indiana.