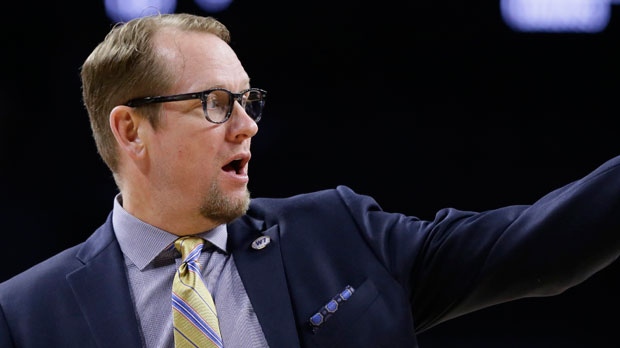 In this Feb. 29, 2016, file photo, Toronto Raptors assistant coach Nick Nurse is seen during the first half of an NBA basketball game against the Detroit Pistons, in Auburn Hills, Mich. (AP Photo/Carlos Osorio, File)

TORONTO -- Eldon Miller said just five people showed up for the first players meeting he held as head basketball coach at Northern Iowa. One of them was Nick Nurse.

A college coach lifer at "almost 80," Miller was one of the many people from Nurse's past who lined up to congratulate the 50-year-old Tuesday when news broke that he'll be the Toronto Raptors' next head coach.

"His quote to me was 'Sometimes it's a crazy business,"' Miller said. "I texted him after he told me that and said 'Maybe it's not so crazy. Somebody smart enough to hire you has an idea what's going on."'

Nurse was already at Northern Iowa when Miller took over the team. Miller then hired him as a student assistant in what would be the first of more than a dozen coaching outposts on his road to Toronto.

Miller said in his 50 years in the game he hasn't seen many basketball minds like Nurse's.

"He likes aggressive offence. That's kind of the way he played. He never saw an open three he didn't like. Of course he could make them," said the coach through a gravelly voice. "You have very few players who not only know where to go on the floor in a play, know the options in a play, but they understand why, they understand the stress it puts on the defence. Nick was way ahead of the game.

"There's not very many people who can try to figure out ways to improve situations based on who the players are. That's what a great point guard does, and Nick could mentally -- and also physically because he made very few errors, despite the fact that he had some limitations athletically, he had a huge assist to turnover ratio, and he just understood."

Miller noted that one of Northern Iowa's highlights was beating an NCAA No. 3 seed when Nurse was on his staff.

Miller was sad to see Nurse go when he left to be a player/coach with the Derby Storm of the British Basketball League, but "Nick is one of the guys you want to see move on."

Miller is now a volunteer assistant with his son Ben's Div. 2 program at University North Carolina Pembroke. He and Nurse have kept in touch in the almost 30 years since he left Northern Iowa. They talk regularly, and often the subject of conversation is the evolving NBA game. Miller laughed when he said Nurse is always way ahead of him.

"He knows the NBA, he knows the philosophy, he knows the changes in the game, the game is totally different now, your players all have to be versatile players, not only offensively but also defensively, they have to be able to guard multiple positions," Miller said. "He's way ahead of that curve. When we talk, he's always out there somewhere I haven't even thought about in basketball."

The Raptors are expected to hold a press conference Thursday to introduce Nurse as their ninth head coach. He replaces his former boss Dwane Casey, who was fired after the Raptors were swept by Cleveland in the second round of the NBA playoffs.