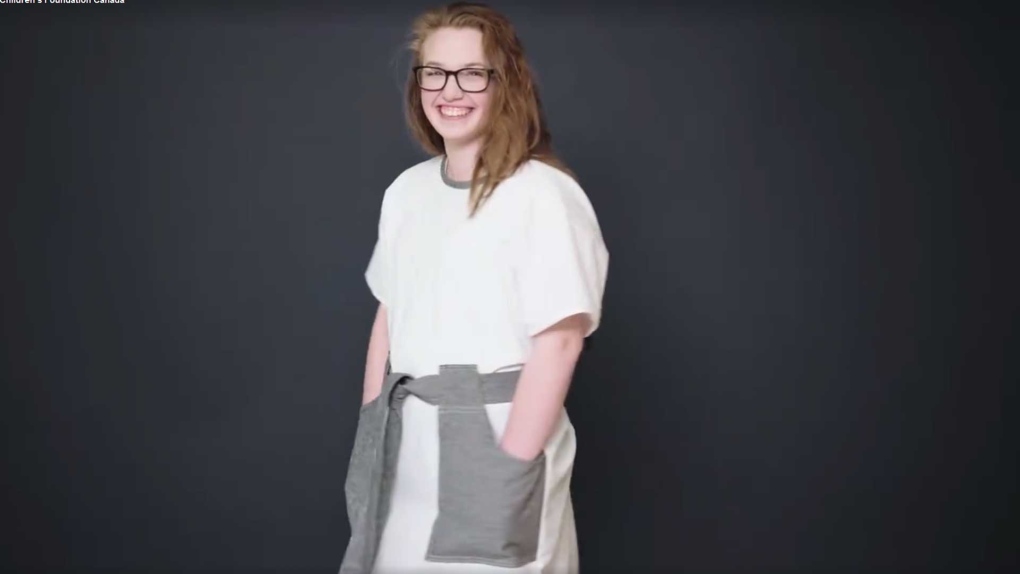 A teen shows off a uniquely designed hospital gown at Children's Hospital of Eastern Ontario in Ottawa in a promotional video for the Ward+Robe program. (Starlight Children’s Foundation Canada / Facebook)

Hospitals are not typically on the list of places where fashion conscious teens can set themselves apart but one organization is looking to change that.

Rejecting the papery, bland hospital gowns that most patients are issued, Starlight Children’s Foundation Canada has launched the Ward + Robes program, an initiative that taps designers to create unique gowns that better express the personalities of teen patients.

The initiative started when the foundation was approached by marketing firm Rethink Canada with a proposal.

“It really just fit our mandate of brightening the lives of seriously ill children and their families,” said Trevor Dicaire, vice president of development at Starlight Children’s Foundation Canada. “We just thought this was such a neat idea.”

From there, the foundation set about working with designers from across the country on a pilot project at the Children's Hospital of Eastern Ontario in Ottawa.

Working with the designers, who donated all their time and materials, the foundation produced about 100 different gowns that they distributed to kids at the hospital.

The teens’ response to the gowns was captured in a video produced to promote the pilot project. Posted to Facebook Monday morning, it went viral and has already garnered more than 1.4 million views.

“This gown lets me be who I am outside of the hospital and outside of being ill,” one girl says in the video.

“It feels like I’m myself; it doesn’t feel like I’m in the hospital anymore,” another teen says.

One of the designs features a skull, another resembles army fatigues, while yet another features a deer graphic with different coloured fabrics.

Toronto designer Izzy Camilleri, who has worked with actress Meryl Streep and the late David Bowie, was one the designers to take part in the project.

“This actually means so much more than even doing that stuff,” she says in the video.

Dicaire, who was present at the shoot for the video, said he was “blown away” by the teens’ response as they tried on the gowns for the first time.

“Watching them come in in the typical standard hospital gowns and change into these Ward+Robe gowns and watching their personalities change instantly – you could just see this whole empowerment of individuality,” he said. “I think every teen that came out in a new Ward+Robe said the same thing; this just feels like me.”

The gowns were distributed as gifts to the teens so that they can take them home, wash them and use them again if they need to return for another stay.

With an overwhelmingly positive response to the pilot – Dicaire says hospitals are contacting him “by the minute” to try and get the gowns – the next step for the foundation is soliciting donations to produce and distribute the gowns.

Dicaire estimates it would take about $200,000 to $250,000 to launch the program across the country. He notes that if everyone who has viewed the video so far donated just $1 each, the program could roll out across North America.

The foundation will also be working with doctors and nurses to make sure that all designs are totally compliant with proper patient care, with space for intravenous lines and pockets for health monitoring devices.

There is also an online kit where anyone can come up with a gown design and submit it to the foundation. Dicaire says he’s hoping that teens themselves might come up with designs that showcase their individuality.

More information about the program, including a design kit, can be found here.