TORONTO -- A woman, who is seven months pregnant and suffering from cardiac issues in Toronto, is facing deportation to Bangladesh, despite medical specialists warning that it’s unsafe for her to travel.

Sultana, who lives in Scarborough, told CTV News Toronto that she's now simply begging the federal agency to at least let her stay until she gives birth to her baby girl, who is due on March 1, to ensure no harm is caused to her child or herself.

"They don’t think about the impact on my upcoming baby," Sultana said through tears. "I told them that I am going, but give me at least until my unborn child is here without stress, without any high risk of travel."

The 30-year-old woman breathed heavily as she spoke. She said that even when speaking about the deportation, her breathing becomes more difficult, and her heart palpitations worsen.

An agent with CBSA told the family that a medical expert will also examine the letters in January, but until then, the family's deportation and flight are scheduled for Jan. 10, Sultana said.

The family has since started a petition to pressure the government to allow Sultana, her husband and three children to stay in Canada until the baby is born.

A spokesperson for CBSA told CTV News Toronto that it is unable to comment on specific cases due to privacy concerns, but said that the decision to remove someone from Canada is not taken lightly. 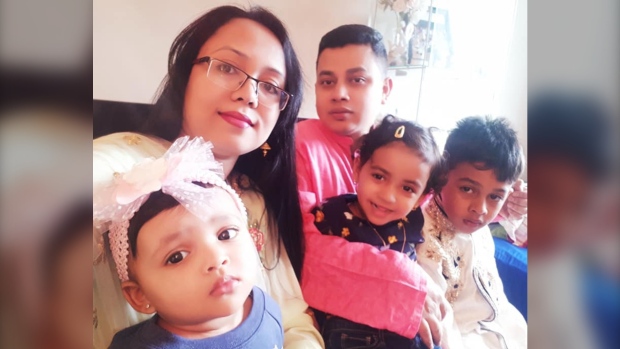 “The Immigration and Refugee Protection Act states that removal orders must be enforced as soon as possible. The CBSA is firmly committed to doing so,” agency spokesperson Jacqueline Callin said in an email.

“Removals of failed refugees and individuals with other immigration violations are … necessary to maintain the integrity of Canada's immigration program.”

Sultana said that she and her husband delivered three letters, one from a midwife and two from doctors, by hand to CBSA, but the agency went ahead and scheduled their deportation anyways.

Sultana said that she was told by CBSA that if she refuses to comply with the deportation on Jan. 10, she and her husband could face imprisonment.

"This is a very big injustice," she said. "My children come home and see me feeling sad. They ask what is happening every time but I don’t have any answers for them."

Sultana said she and her husband left Bangladesh and moved to Canada in 2014 seeking a better life. She said they were looking for better living standards and jobs and for better services and healthcare for their son who has autism, she said.

The couple's daughters, who are three years old and fifteen months old, were both born in Canada.

On Oct. 4, the immigration officer looking over their case denied their permanent residency application on humanitarian and compassionate grounds saying that with some struggle the family could reintegrate in Bangladesh and eventually find jobs and services for their son.

Sultana's husband recently received a permanent job offer from the Fred Victor Centre for an accounting analyst position. The organization, which supports homeless and low-income residents in Toronto, wrote a letter to the immigration minister advocating for the family’s stay.

Sultana said the risk of resettling back in Bangladesh is large for her family, but she hopes that at the very least she could remain in Canada until her baby girl is born.