Many Toronto classrooms have elevated carbon dioxide levels, according to Toronto District School Board documents obtained by CTV News.

Experts generally recommend avoiding indoor CO2 concentrations above 1000 parts per million, with one study even showing drops in certain cognitive abilities at that threshold.

But data shows that more than 40 per cent of schools tested in Toronto have registered above that ceiling within the past five years.

Reg Ayre, a manager at Toronto Public Health, said the ideal situation for a classroom would be at most between 800 and 1000 PPM. He said levels creeping up past that mark won’t cause any health problems, but that people often begin complaining about air quality in a room with that much CO2.

“You have to have very high levels of carbon dioxide to initiate some kind of change in the body,” Ayre said. “Carbon dioxide is really important, though, in monitoring the quality of the indoor air because it gives you a sense of the amount of fresh air that’s introduced into a classroom.”

Robert Whiting, a senior project manager with the Canadian Centre for Occupational Health and Safety, said while carbon dioxide on its own isn’t harmful, it often acts as an indicator for other, nastier pollutants in the air.

“Carbon dioxide never comes by itself,” Whiting said. “If you hit a value above 1000 (PPM), it means you really need to do something to ventilate the area better.”

The main cause of carbon dioxide build-up indoors is breathing – the molecule is emitted as a by-product of respiration, and when large groups spend time in close quarters, the air begins to fill with CO2.

Normal levels for fresh, outdoor air range between 300 to 400 PPM, and most organizations say about twice as much CO2 should be expected in indoor environments. Stale, stuffy air could be an indication of high levels of carbon dioxide and other molecules not found naturally in air, and should be tested for problems, Whiting said.

According to nearly 300 pages obtained through a freedom of information request, more than 100 of the TDSB’s 591 schools have had an air quality test at least once since 2010. Forty-six of those schools had at least one classroom measure above 1000 PPM, with several of the schools measuring upwards of 2000 PPM, and as high as 2650 PPM in one instance.

After being visited by a technician, about one quarter of these schools were repaired and retested, with most of the schools falling back to an acceptable level when looked at again.

Still, many schools eclipsed the 1000 PPM mark without any follow-up testing. And readings are only ever taken when official complaints are made to the school board, despite teachers’ federations privately hearing complaints for years.

“We hear regularly from teachers in the classroom and in schools that the air is bad, that it’s dirty, that it gives them headaches and makes them tired,” said Michael Platt, the executive officer of the Ontario Secondary School Teachers’ Federation. “It’s a chronic problem.”

Platt said he was “quite shocked” at how high some of the CO2 readings were in Toronto schools. 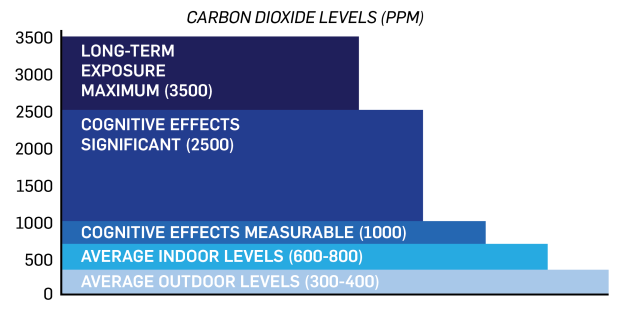 A problem for students in particular

On top of creating an uncomfortable atmosphere and acting as an indicator for other pollutants, carbon dioxide by itself might even affect students’ ability to learn.

He said parents should pay more attention to the way air quality might be affecting their children’s education.

“I think people should want their schools to be better ventilated because of the evidence that low ventilation rate is associated with adverse outcomes,” the former Berkeley Lab scientist said.

In one paper, Mendell’s team measured a significant drop in decision-making ability at 2500 PPM, with effects noticeable at as low as 1000 PPM. 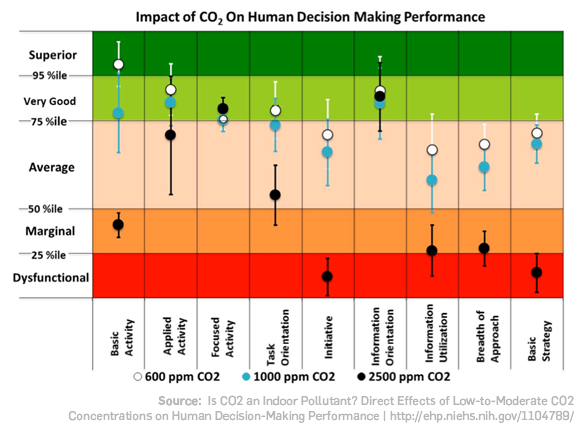 Though Mendell said his study should be replicated before drawing any conclusions from it, he said his team was surprised to see carbon dioxide alone having a measurable effect on people’s performance.

“It would be shocking to think that levels of carbon dioxide that you would sometimes get in buildings would lead to such a decrement in abilities.”

Not a problem, TDSB says

The school board reiterated that none of the carbon dioxide levels were at all unsafe to breathe.

“To be clear, there is no school or site in the entire Toronto District School Board that has unhealthy or unsafe air,” Ryan Bird, a spokesperson for the board, said.

Bird said the CO2 readings were often indicative of a blocked vent or another minor problem with ventilation systems, which were easily fixed.

“We rely upon our staff and students to let us know if they have issues with stagnant air or something off in a classroom,” Bird said, noting that single measurements weren’t indicative of an ongoing problem.

“It doesn’t necessarily reflect constant levels, but one point in time when that was measured and used to correct the problem.”

Others, though, consider poor indoor ventilation to be an ongoing problem, especially inside aging school buildings.

Whiting said many older schools were built before current ventilation standards existed, and that some schools are shut down due to the restrictive costs of bringing the building up to code.

And Mendell, who measured constant readings in California schools in a separate study, said a lack of school funding and a push towards energy conservation is causing air quality in schools to trend downwards.

“It definitely does not get enough attention,” Mendell said. “And so this kind of issue often gets ignored completely because it’s not convenient to pay attention to it.”

With a report from CTV Toronto's Naomi Parness

The interactive map below shows test results for carbon-dioxide levels taken over the last 5 years at public schools across the GTA. The data was obtained through freedom-of-information requests, and covers 106 schools for which testing was performed. Click here for a full-sized or mobile-friendly map. 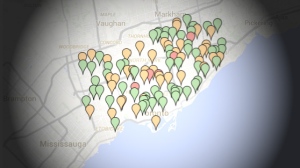