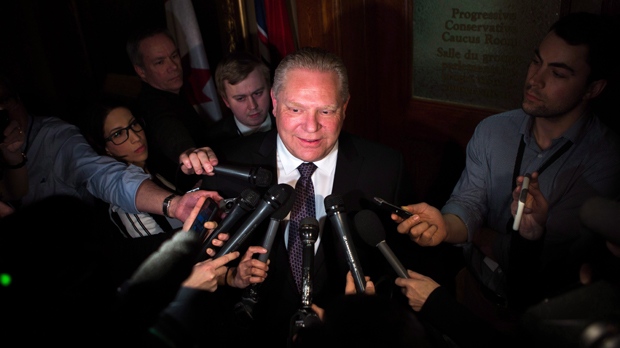 The Ontario PCs would win a strong majority if a provincial election was held today, and the NDP would form the Official Opposition, a new poll suggests.

Forum Research found that 46 per cent of decided or leaning voters said on April 18 that they would support the Ontario PCs if a vote were held today, compared to 27 per cent for the NDP and 21 per cent for the Liberals.

The PCs strength has been trending in their polls for several years. But the NDP have now come second in six of the firm’s last 11 polls, dating back to June 12-14, 2017.

“The bump in support following the Liberal budget is gone,” Forum Research President Lorne Bozinoff said in a news release. “The (PCs) are back where we’ve seen them for the past year, and Doug Ford looks on track to be Premier in a few months.”

Two days before the poll was conducted, the Ontario NDP released its party platform, calling for universal pharmacare and dental care, higher corporate taxes and the re-purchase of Hydro One to make it public.

Four per cent of respondents said they would vote Green while two per cent expressed support for another party.

Translated into seats, Forum said the PCs would win 94 of 122 available seats, putting them into what Bozinoff calls “super-majority” territory.

The NDP would win 23 seats, while the Liberals would win only seven seats, not enough for them to maintain official party status and the privileges it provides at the legislature.

The poll was conducted using interactive voice response technology and reached 1,126 Ontario voters. The data was weighted to reflect the overall demographics of Ontario.

It is considered accurate plus or minus three per cent, 19 times out of 20.