TORONTO -- The Special Investigations Unit has invoked its mandate following an altercation during a rally near Eglinton and Oakwood Saturday night that led to the arrest of two people and left seven police officers injured.

Toronto Police said they responded to an incident just before 8 p.m. in the area of Oakwood Avenue and Eglinton Avenue West, where people had gathered for a rally in support of Black-owned businesses affected by the construction of the Crosstown LRT and the COVID-19 pandemic.

“Individuals were there having a peaceful protest and officers were there to assist the public and also to ensure the safety of the protesters,” Const. Edward Parks with the Toronto police told CP24.

According to police, a man walked into the intersection and jumped on a car that was not involved in the protest.

During the altercation, police said another man intervened and fought the officers. 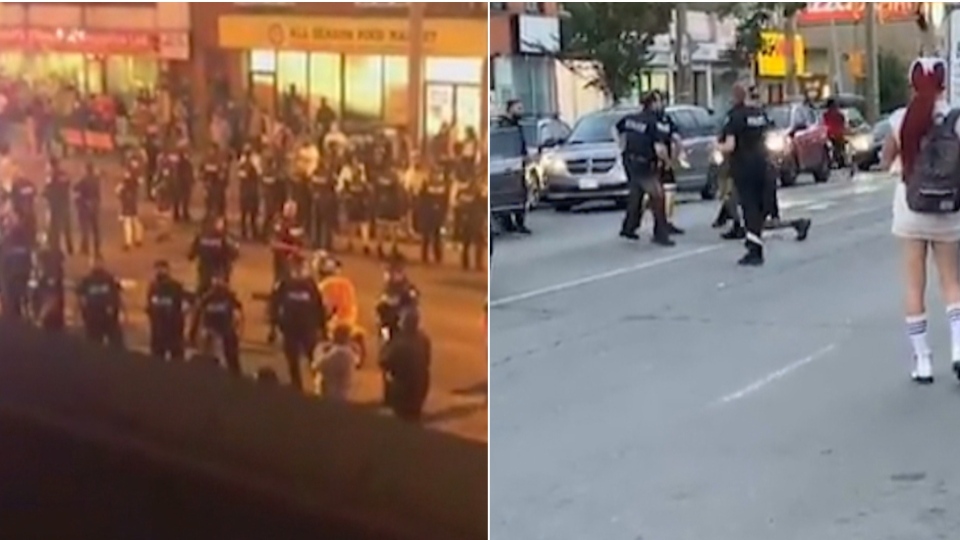 One of the men was Tasered, police said.

Images and videos posted on social media showed a massive police presence in the area at the time of the incident.

One video posted on social media captured the moments when police Tasered the man.

The witness who recorded the video told CP24 that after the man jumped down from the car, he was hit and Tasered by police. She said a bystander then tried to help the man and tried to get the police officer off of him.

Police said a female officer was injured during the incident after she was punched in the head.

A total of seven police officers were hurt during the altercation, police said, including four officers who were treated in hospital.

As of Sunday morning, all officers have been released from hospital and are resting at home.

Jamilah Reeves, a member of the youth-led group Reclaim, Rebuild Eglinton West, who organized the rally, told CTV News Toronto that the incident was uncalled for.

Reeves was seen in another video sitting down beside the man as she and other members of the public tried to comfort him after he was Tasered.

She said the police allowed her to talk to the man.

"I was talking to him earlier, so I thought that maybe I can get him to calm down so that there's less resistance in getting him into the car," Reeves said.

"I feel like having a member of the community talk to the person that's been apprehended is essential. It can diffuse a situation. And I feel like he just needed somebody to let him know that he's safe and that he wouldn't get hurt."

The man began listening and complying, she said, until paramedics arrived.

"That's when things escalated. He did say that he didn't want any white people touching him," Reeves said. "That was his trigger. And that's what set him off, unfortunately."

Reeves said the number of officers who responded to the scene was unnecessary and made the situation worse.

"I just want people to know that what happened today is not representative of our community or organization," she said.

"I would like the focus to be on reclaiming, rebuilding Eglinton West to support Black businesses, make sure that their own community doesn't get run out by the LRT gentrification. I just want support from people to help the community get better."

SIU called in to investigate

In a news release on Sunday evening, the province's police watchdog said the 33-year-old man who jumped on a car was transported to hospital for treatment.

"The unit is awaiting confirmation on the nature of the man's injuries," the SIU said.

Police notified the SIU of the incident at 1:43 a.m., the agency said.

The SIU investigates reports involving police where there has been death, serious injury, or allegations of sexual assault.

- with files from Beth Macdonell