Police search for suspect after sexual assault in Brampton 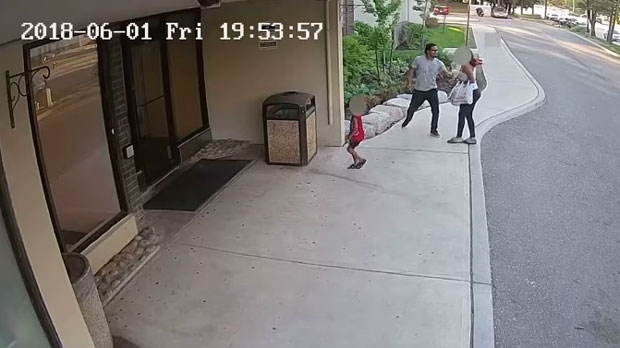 A suspect wanted in connection with a sexual assault is pictured in this security footage. (Police)

Peel police are asking for the public’s assistance in identifying a suspect wanted in connection with a sexual assault investigation in Brampton.

The incident occurred in the evening of June 1 near the intersection of Kings Cross and Knightsbridge roads.

Police say that a 23-year-old woman, walking with a child, was approached by a man in front of a convenience store. Investigators say the man attempted to start a conversation with the woman.

The woman left the scene and began walking towards an apartment building. Police say the man followed her in a silver vehicle.

In video footage released by Peel Regional Police, the suspect is seen getting out of his vehicle and running up behind the woman outside an apartment building. He appears to grab her from behind.

The woman is then seen turning around and pushing the man away. The video shows the suspect running away briefly, before doubling back and running toward the woman again. The pair then appear to get into an altercation, with man grabbing and trying to push the woman to the ground.

After a few seconds, the man is seen fleeing toward his vehicle and driving off.

Const. Sarah Patten of Peel Police told CP24 the woman did not sustain any serious injuries. She also said there is no indication that the accused and the victim knew each other.

“I’m just glad that there were no injuries or anything to the child,” she said. “It’s disgraceful.”

Police have described the suspect as being a South Asian male in his early 20s. He is about five-foot-seven with a medium build and glasses. He was seen on the security video wearing a grey t-shirt and dark pants.

Patten says police are canvassing the area looking for more video footage and witnesses. Anyone with information about the incident is being asked to contact investigators at 905-453-2121 ext. 3460.