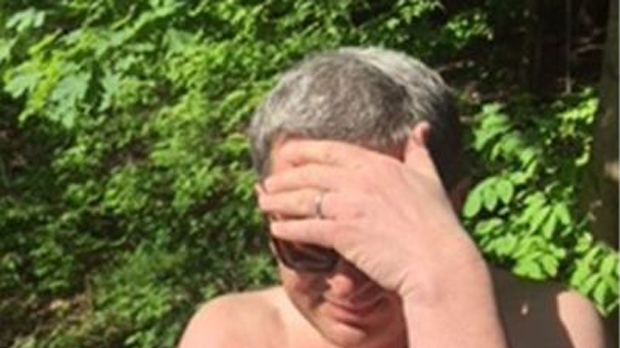 A man wanted in an indecent exposure investigation is shown in a TPS handout image. (TPS)

Investigators have released appropriately cropped images of a man sought for allegedly approaching women in three Toronto parks in the nude last month.

The first incident occurred in David A. Balfour Park on Rosehill Avenue, near Yonge Street and St. Clair Avenue West, at 12:37 p.m. on May 27.

A woman told police she was in the park when a man clad only in a hat, backpack, sunglasses, socks and shoes approached her and attempted to engage her in conversation.

The next day at 11:31 a.m. in Alexander Muir Memorial Gardens Park, at Yonge Street and Chatsworth Drive, a woman told police a man with a similar physical description approached her while naked.

About an hour later, two women in Sherwood Park, 1.3 kilometres to the south, reported that a naked man approached them.

On Thursday, police said they received two additional complaints about the man, one allegedly involving the suspect jogging naked in the Moore Park ravine on May 25, 2018.

The complainant in that instance managed to snap pictures of the suspect and they are being circulated to the public.

The suspect is described as a white male between the ages of 40 and 55, standing between five-feet-seven and six feet tall, with a medium build.

All witnesses said he spoke with an accent, had chest hair and was wearing a blue draw string backpack.