Police have released footage of a suspect in the murders of Toronto billionaires Barry and Honey Sherman.

Police said Tuesday an unknown person was captured on security video near the Sherman's multi-million dollar North York property during the same timeframe their murders took place in December 2017.

Homicide Det. Sgt. Brandon Price said police have combed through hours of security footage in connection with the murders but have been "left with one individual" they are unable to identify.

Price said the security video was taken in the "evening or night hours of Dec. 13, 2017," which is the same day the couple was last seen alive.

Barry, 75, and Honey, 70, were found in a semi-seated position on the deck of their North York home’s indoor pool, hanging by belts from a railing.

While some police sources initially suggested to media outlets that the incident could have been a murder-suicide, police eventually classified it as a double homicide.

Price said he's asking the public to pay particular attention to the person's stride to see if that helps anyone identify the suspect. He said the suspect kicks their right foot up with each step.

The skin colour, weight and gender of the suspect are not known. Price said video analysis shows the individual is between 5'6 and 5'9 tall. 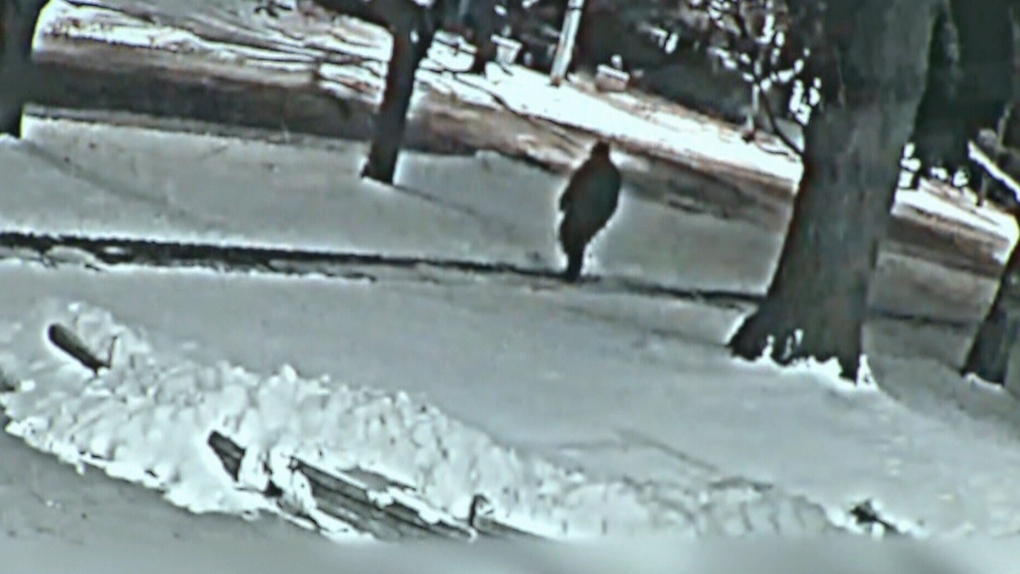 Police said the footage released on Tuesday is not the only video they have of the suspect. Price said he released a clip that has the "greatest likelihood" of someone being able to identify the person.

"If you recognize yourself in this video, please come forward so you can be excluded from our investigation," he said.

Price said he's also not ruling out that the person captured in the video could have had a legitimate reason to be in the area.

In November 2020, police said they had identified a person of interest in the murders, but declined to name that individual.

The Sherman family has previously criticized police handling of the investigation and, in 2018, offered a $10-million reward for information on who killed the couple.

The Sherman family hired a team of private investigators, who claimed police did not fingerprint domestic staff with access to the family’s home until “well” into the investigation and said police ignored possible evidence of forced entry into their home.

Last June, a court unsealed Barry Sherman's will, showing it was changed significantly nine months before he was killed.

Today D/S Price @TPSHomicide provided an update on the investigation into the murders of Barry & Honey Sherman. I’d like to thank Brandon & his team for their ongoing efforts to resolve this case & ask anyone with info to contact police or @1800222TIPS https://t.co/86uuFedkkx pic.twitter.com/poZumNA8mJ

He ordered his assets outside of his primary business split evenly among his four adult children.

Anyone who recognizes the person in the video is asked to contact police at 416-808-7400, shermantips@torontopolice.on.ca or anonymously through Crime Stoppers anonymously at 416-222-TIPS (8477).

Full snow moon considered 'micromoon' because of distance from Earth

February's full snow moon will light up the sky over the next two nights, with the spectacle reaching full illumination on Sunday morning. But this year’s full moon was smaller than those of recent years. It’s called a “micromoon.”