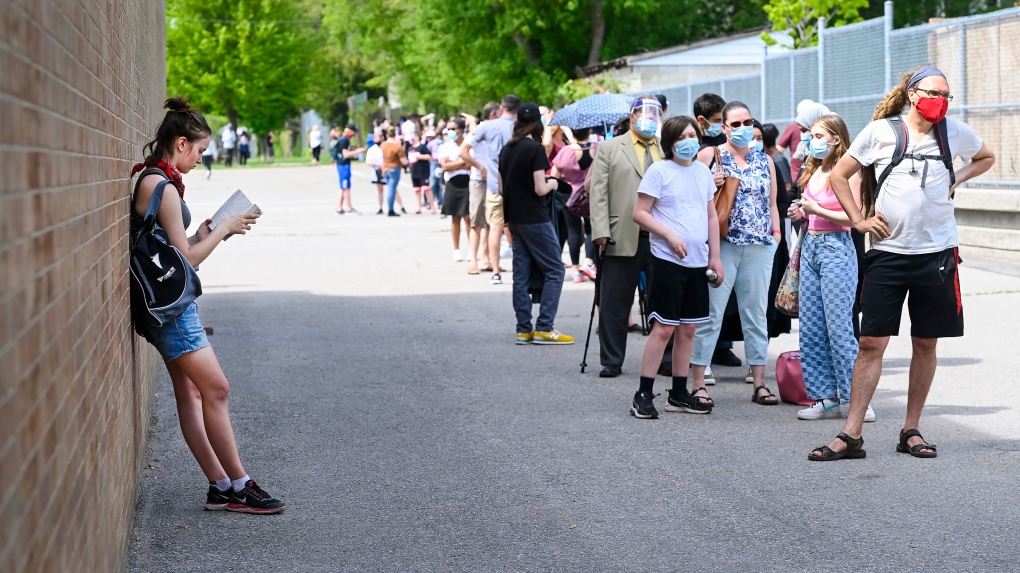 Families and youth aged 12 and older line up for a COVID-19 vaccine at Gordon A Brown Middle School in Toronto Wednesday May 19, 2021. THE CANADIAN PRESS/Nathan Denette

TORONTO -- Ontario's vaccination effort expanded to some of its youngest residents on Sunday, prompting parents to push through technical challenges in a bid to get their children registered for a shot.

Youth 12 or older officially became eligible to register for an appointment through provincial channels as of Sunday morning.

Many youth had previously been able to obtain a vaccine through pop-up clinics or initiatives spearheaded by regional public health units, but the formal expansion allowed teens and parents alike to sign up using the provincial portal or call centre.

Youth are now also eligible to obtain a shot at pharmacies offering the Pfizer-BioNTech vaccine, the only one currently cleared for use in those under 18.

Fatima De Jesus of Brantford, Ont., says she spent nearly an hour on the province's portal trying to book an appointment for her 16-year-old daughter on Sunday morning.

It took multiple attempts on both her computer and cellphone before she was finally able to nail down a slot in early June.

"I'm happy that she's going to be protected and she's happy that it may help her see some friends and get back to something normal of a 16-year-old," De Jesus said in a telephone interview, noting her daughter was the only family member who had yet to receive a vaccine dose.

Residents in other jurisdictions had less luck, however, receiving notices from their local public health authorities indicating access to the provincial portal would not be immediately available.

"The Health Department is aware that the province has opened eligibility for individuals 12 years and older," read a notice from the unit overseeing Durham Region.

"The Health Department is currently reviewing vaccine and booking availability to accommodate this change. We will be updating our website and appointment booking system as soon as possible."

The lack of access led to frustration for Walied Abdeldayem of Milton, Ont., who spent part of Sunday trying in vain to book an appointment for his son who turns 17 in a few days.

"It's frustrating," he said. "It's another (example) of mixed messages that the government has been giving us."

The Ministry of Health declined to comment on why certain public health units have not opened bookings for younger residents, saying the portal is functioning normally and urging those experiencing technical difficulties to clear their caches and keep trying.

The expanded vaccine rollout came as the province reported 1,691 new cases of COVID-19 and 15 added deaths linked to the virus. The data was based on more than 31,200 tests.

The Ministry of Health said 1,041 virus patients are currently in Ontario hospitals, with 693 in intensive care and 480 on ventilators.

Ontario said it administered 140,330 doses of COVID-19 vaccines since Saturday's report, for a total of more than eight-million doses.

This report by The Canadian Press was first published May 23, 2021.