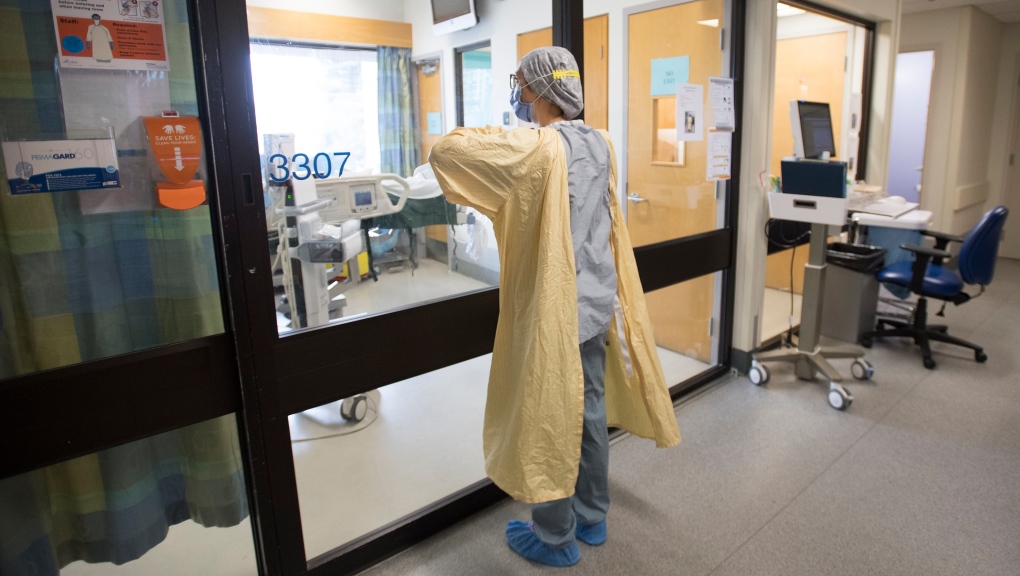 A nurse puts on her personal protective equipment prior to entering a patient's room in the COVID-19 intensive care unit at St. Paul's hospital in downtown Vancouver, Tuesday, April 21, 2020. THE CANADIAN PRESS/Jonathan Hayward

TORONTO -- Hundreds of thousands of front-line workers in Ontario are still waiting to receive a pandemic pay premium they were promised about two months ago.

The provincial government has acknowledged the delay in paying the approximately 375,000 workers, and says the cash is coming soon.

A spokeswoman for Health Minister Christine Elliott said Monday the initiative, which covers about 2,000 employers, is the largest of its kind in Canada. Hayley Chazan said the money will flow in "very short order," but she wouldn't offer a specific date.

"We are committed to expediting the work required to get this money onto the paycheques of the critical workers across the province," Chazan said in a statement.

Premier Doug Ford announced the premium in late April, calling it a way of recognizing the sacrifices essential workers make as they fight the spread of COVID-19.

It included a $4 hourly raise over the next four months and a monthly bonus of $250 for those working more than 100 hours in a month.

But unions representing hospital workers have said not everyone in the facilities is eligible for the pay, which has damaged morale.

The president of the Ontario Council of Hospital Unions said since the government announced the initiative there has been debate about who should be part of the program.

"There's been a bit of paralysis when it comes to rolling the process out the door," Michael Hurley said. "You have a morale crisis coming along with this indecision at a bureaucratic governmental level."

The program was later expanded to include more workers such as public health nurses and paramedics.

The union has called on the government to cover all hospital workers and not pick and choose between professions.

Hurley said the pay was supposed to be flowing to hospitals at the start of June but everyone is still waiting.

The continued delays just re-enforce a view among some workers that their efforts aren't appreciated, even if they are coming into contact with patients who have tested positive for COVID-19, he said.

"They're deeply hurt and angry," Hurley said. "There's a lot of anguish about this pandemic pay."

The Ontario Hospital Association said it wants all hospital workers to receive the pay premium.

"The implementation of the government's pandemic pay has caused understandable frustration because it excludes one-third of hospital employees despite the fact that everyone is contributing in the fight against COVID-19," he said in a statement.

"It's a slap in the face to all of those folks who are working day in and day out to make sure that we have what we need," she said.

Horwath said the payments should be retroactive to March 11, when COVID-19 was declared a global pandemic.

Green party Leader Mike Schreiner said it was "disappointing" that Ford did not make this a higher priority.

"After heaping praise on front-line workers, Premier Ford has not been in a rush to reward them with the pandemic pay," he said in a statement.