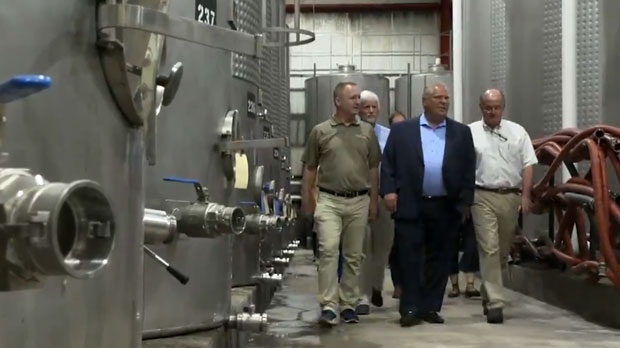 A winery in southern Ontario is being slammed on social media after it was revealed that its president made political donations to the Progressive Conservative Party ahead of being featured in an “Ontario News Now” video.

The video featured Rick Nicholls, the MPP for Chatham-Kent-Lemington, reciting some basic facts about the winery, including how many people it employs and how much wine is produced. The premier is also seen in the video touring the winery.

“Go out and buy a bottle of Pelee Island wine,” Ford says in the video flanked by Nicholls. “It’s great. It’s coming to a convenience store near you.”

According to Elections Ontario, Walter Schmoranz, the president of the winery, has donated to the Ontario Progressive Conservative Party twice this year.

The first contribution was made in February and totaled $1,050. A few weeks before the “Ontario News Now” video was released, Schmoranz made another $1,000 donation.

After the video was posted, social media erupted with calls to boycott the winery.

There are lots of amazing Canadian wine choices out there for consumers who do not want to support a business tied to Ford's corrupt government. #BoycottPeleeWinery https://t.co/LAM7ZPlTTG

You appeared on @fordnation's fake news service in support of a premier who is hurting vulnerable children. You made a choice and now must deal with the consequences. #BoycottPeleeWinery

When you tell your best friend, who owns a cottage on Pelee, about the winery being in bed with @fordnation and her immediate response is, “guess we can’t go back there anymore”. @Peleewinery #boycottpeleewinery

The winery posted a response on Twitter on Monday, saying they met with the premier to discuss the future of the wine industry in Ontario.

“Our goal: to share issues facing all (Ontario) wineries/grape growers including a taxation policy that supports the industry by not taxing (Ontario) like imports,” the winery said on Twitter. “We apologize that this goal is not being focused on.”

Darryl MacMillan, the sales and marketing manager at Pelee Island Winery, confirmed to CTV News Toronto that the the winery hosted Ford to discuss "many important priorities facing grape growers and craft wineries in Ontario."

"These included modernizing the import tax levied on wine, supporting domestic wine grape producers in securing a stable market, flooding and shoreline erosion in Essex County and Pelee Island, and the need for infrastructure improvements," MacMillan said in a statement.

"It is critical that we work together with the province on issues that impact the businesses and livelihoods of those who depend on craft winemaking and grape growing in Ontario."

In a statement, the premier’s press secretary said that Ford was not aware of any donations made by Schmoranz.

The hashtag #BoycottPeleeWinery was trending on Twitter for most of Monday. A few people on social media were sympathetic with the winery’s position, but adamant that they should have “known better.”

“Feeling down about this one,” another person said on Twitter. “We chose Pelee Island Winery for the wine served at our wedding because it was from the area I grew up in. Their service throughout the whole process was fantastic. But, given these circumstances, we’re sadly joining #BoycottPeleeWinery.”

#BoycottPeleeWinery sad day, I can no longer support my favourite winery because they are on the wrong side of the political spectrum & history supporting the Ford government! #onpoli #BoycottPeleeWine #wine