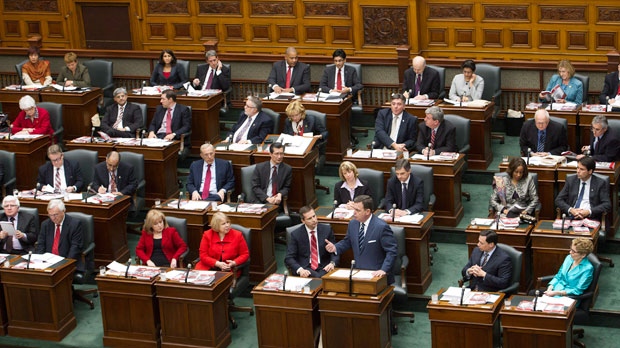 The Progressive Conservatives say Ontario's Liberal government must be running scared to accuse them of contempt.

"Fedeli flagrantly breached his duty to keep the information confidential," government house leader John Milloy wrote in a letter to Speaker Dave Levac. "There can be no doubt that Mr. Fedeli was aware that the information he disclosed was contained in a commercially sensitive document that was confidential to the committee."

Fedeli rose in the legislature Tuesday to quote from documents that were given to the legislature's estimates committee, saying they showed Premier Kathleen Wynne and the Liberals had been advised they were billions of dollars short on their deficit reduction targets, but then "lied" about the state of Ontario's finances to the public.

"This is all about Kathleen Wynne. This is all on her watch," Fedeli repeated Thursday. "It's her and her alone that's being deceitful."

The contempt charge is the Liberals' way of getting back at the Tories for accusing former energy minister Chris Bentley of contempt for not releasing documents on two cancelled gas plants that cost taxpayers $1.1 billion, added Fedeli.

"They lied to the taxpayers about the budget and now they are running scared," he said. "They've decided to come after me personally."

The Conservatives insisted Fedeli released only documents that the committee had determined could be made public, not those they agreed would remain confidential to protect businesses or third parties seeking contracts with the government. If the government put the cabinet documents Fedeli quoted in the wrong box given to the committee, that was the Liberals' fault, not his, said PC house leader Jim Wilson.

"You guys messed up by sending four different versions of one document," Wilson told the legislature. "You can't even do a coverup properly."

One of the documents Fedeli released showed the Liberals considered a broad-based public sector wage freeze until 2017-18 to eliminate the $11.7 billion deficit by then, which he said should always have been public.

The New Democrats agreed with the Tories that the government tries to hide too many documents by claiming they are commercially sensitive when they are not.

"The government, numerous times, tried to say that certain documents were sensitive, tried to make them private and confidential with the committee, but when committee members looked at the documents, they weren't commercially sensitive, they were politically embarrassing," said NDP house leader Gilles Bisson. "That was the difference."

The attack on Fedeli had the Conservatives convinced the Liberals are "hiding something big" that they don't want the public to hear, so Tory researchers are pouring through thousands more documents that were given to the committee.

"We haven't found it yet but obviously if they're going to these great pains to smear me, to stop me, to hide these documents, they must be hiding something big," said Fedeli. "I suspect they've got some drastic measures (to balance the budget), billions of dollars that they're going to have to find."

The Speaker said he would take some time to consider Thursday's arguments before issuing his ruling on whether the contempt charge against Fedeli can proceed.

Another legislative committee that's been considering the contempt motion against Bentley, who resigned from politics over a year ago, is still holding public hearings and has not decided yet if it will recommend that charge go forward.

It was the bitter debate over the contempt charge against Bentley, who was warned he could lose his license to practice law and even be jailed if found guilty, that prompted Dalton McGuinty to resign as premier in October 2012 and prorogue the legislature for four months until Wynne took over as Liberal leader.