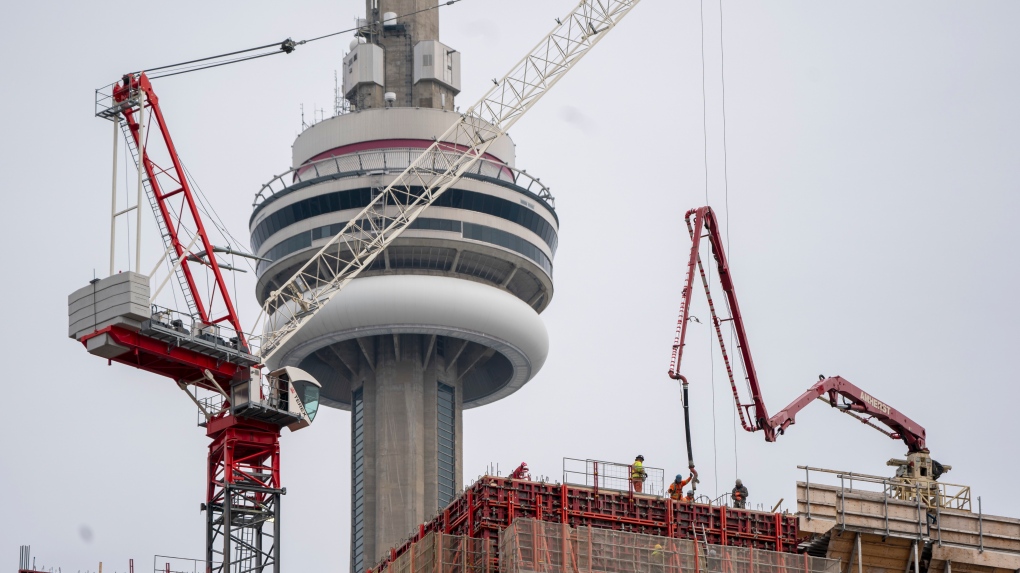 A construction site in full swing in Toronto on Wednesday March 18, 2020. THE CANADIAN PRESS/Frank Gunn

Ontario’s population could increase by as much as six million over the next two decades and some experts are warning that governments need to start “playing catch up” on building out the necessary infrastructure to accommodate that sort of influx before it is too late.

New projections released by Statistics Canada this week suggest that Ontario’s population will grow from 14.8 million to approximately 19 million by 2043 in a medium growth scenario and could even surpass 21 million in a higher growth scenario.

It is a good news story for the region’s economic prospects and vitality, most experts agree.

But it undoubtedly will pose a challenge for the Golden Horseshoe region, which is already struggling with a housing crisis and crippling gridlock.

“Population growth is really good and really important for the province. It helps fuel economic growth, it reunites families and it is great for the culture and the dynamism of our communities. But it also will continue to put pressure on our infrastructure which is already stretched,” Matti Siemiatycki, a professor and the director of the Infrastructure Institute at the University of Toronto, told CP24.com this week. “Infrastructure takes long-term planning, it is not something you can just flip a switch on.”

While there was a trend of people leaving the Greater Toronto Area for less expensive markets elsewhere in Canada during the pandemic, the new projections point to a rate of population growth in Ontario, which will exceed every province other than Alberta and British Columbia.

Most of that increase will be driven by immigration, continuing a longstanding trend in Canada, but the projections also point to an aging population, which could put additional pressure on things like the healthcare and long-term care systems.

“We are definitely playing catch up because our systems are stretched at the moment. Housing is becoming increasingly unaffordable, you see our healthcare system struggling under the weight of the pandemic and then you see everything else. You know, when there are heavy rains, our sewer systems can’t accommodate them, we are having power outages, our cell phone services are vulnerable. So we are seeing what it is like when infrastructure creeks,” Siemiatycki warned. “With more people that will put even more pressure on the system and require us to be really strategic about which infrastructure we choose, how we build it out and then making sure it can handle the stresses it is going to face as our community grows.”

The Ford government has vowed to tackle the housing crisis by building 1.5 million new homes over the next decade, however a report released by the Smart Prosperity Institute at the University of Ottawa earlier this month warned that the province is unlikely to reach that goal.

Speaking with CP24.com, Siemiatycki stressed that population growth is still “very positive” at the end of the day as it means that “people are choosing Ontario and the GTA as a place that they want to come to and set up a new life,” in many cases starting businesses and contributing to further economic growth.

But Stacy Evoy, who is the president of the Ontario Real Estate Association, said that the projections are “scary” given a shortage of homes, which has inflated prices and forced many young people to abandon the communities they grew up in.

A survey released by Royal LePage last week, in fact, showed that only 22 per cent of GTA millennials who still harbour dreams of home ownership intend to purchase property in the communities they currently reside in.

“This release with these new numbers should be shouting to everyone that we are still not doing enough and really the dream of home ownership is on life support in Ontario,” Evoy told CP24.com this week. “Even if these projections are high and we see the influx on the low side – about 2.1 million people migrating to Ontario – I think that is of concern. We can’t even address the housing supply and the challenges that we are having at the current population level, let alone this huge influx over the next two decades.”

Evoy, who works as a real estate broker in the London area, told CP24.com that she routinely sees young people forced to move away due to the cost of housing in Ontario, leaving their families and support networks behind.

She said that she would like to see governments work together to find ways to add density in some residential neighbourhoods ahead of the coming population boom, including changes to zoning regulations that would remove some of the red tape around building multi-family homes like duplexes and triplexes.

The consequences of not doing so, she warned, could be dire.

“Rising interest rates might be masking the problem as prices dip but we are still in an affordability and housing supply crisis,” she said.

While there is considerable deviation among the different scenarios, all of them point to continued population growth in Ontario over next two decades.

Canada’s population as a whole is also expected to grow, rising from 38 million in 2021 to 56.5 million in 2068 under a medium growth scenario.

“At the moment we are really at a crossroads in terms of how our urban regions are going to grow,” Siemiatycki told CP24.com. “We are in a housing crisis and there is an urgent need to build more units but what form and where those are located is going to tell a lot of the story about the liveability of our cities for years to come. If we can find ways to intensify and do that while maintaining quality of life that will be a huge advantage for our cities. But if we continue to press outwards at the edge of our regions, eating into our prime farmlands, into our natural habitat, onto flood planes and marshlands that is going to be a pattern of growth that as the climate changes is going to be challenging.”