As calls for a conflict-of-interest investigation into a public appointments scandal rocking Premier Doug Ford’s government continue to grow, Ontario’s Integrity Commissioner says he is prevented by law from releasing his findings publicly.

Taylor Shields, the cousin of French’s wife, and Tyler Albrect, a friend of French’s son, were both given high-paying agent general appointments in the U.K. and the U.S. on the very day the Ford government announced a cabinet reset. The jobs came with compensation packages of between $164,910 and $185,000 a year for three year terms.

Both appointments were rescinded by Premier Doug Ford, who has since launched an internal review of pending public appointments and has promised to put past appointments under the microscope as well.

But Fraser says Ontario’s Integrity Commissioner should launch an independent review of whether the government broke any conflict-of-interest rules in making the appointments.

“I firmly believe that it's in the public interest to have a better understanding of what happened and to and to take steps to ensure that never happens again,” Fraser told reporters at a news conference Thursday.

However, Wake told Fraser in a letter that even if he launches an investigation into French’s conduct under the Public Service of Ontario Act, he has no legal authority to release any conclusions publicly.

“The decision to do so would be the premier’s,” Wake told Fraser in a letter.

The Premier’s Office says Wake has yet to launch an investigation and while Ford would respect the process, he won’t “comment on hypotheticals.”

Fraser believes the chances of Ford releasing the report publicly are “almost none.” 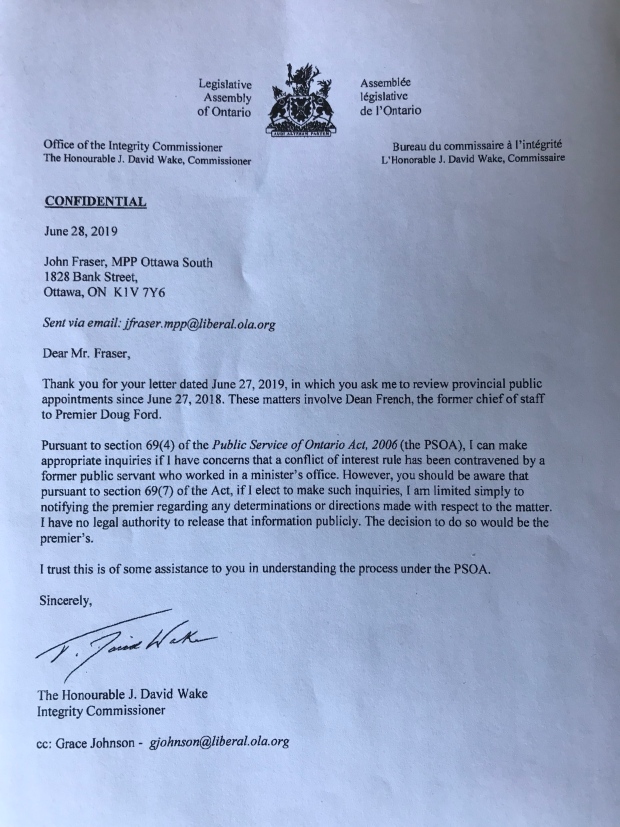