Healthcare, education, children's and social services and transit will see increases to their budgets this year, but nearly every other ministry will continue to face the axe.

The province is kicking in another $68 million to cut hospital wait times, $310 million to continue social assistance and other programs targeting low-income households with kids and an extra $279 million for families with children with autism, who were angered last year when the Ford government suddenly changed the funding formula and waitlist for therapy.

Along with transit money, increases to childcare and public health funding for cities, the province is spending $1.3 billion more than forecast in last year's budget.

But several other ministries will still face stiff cuts.

On a day when students at three major Toronto universities held walkouts to protest post-secondary funding cuts, the fall economic statement shows the Ford government will continue to cut the Ontario Student Assistance Program this year, to the tune of $700 million.

Northern Affairs, Energy and Mines sees a $300 million cut for this fiscal year.

Municipal Affairs and Housing is also cut by $360 million, along with $70 million from Government and Consumer Services, and $50 million from Heritage, Tourism, Culture and Sport. 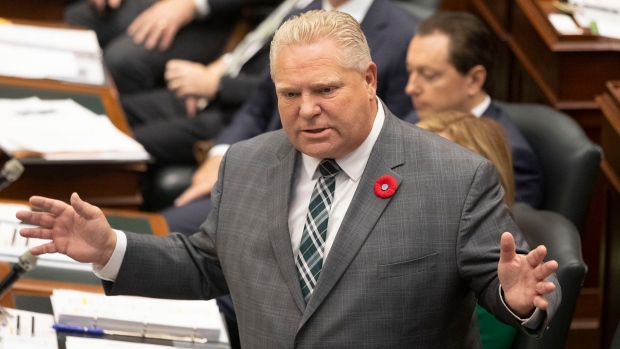 The provincial government is also cutting the tax rate on aviation fuel paid by residents of northern Ontario by 60 per cent, saying anyone who flies in the north once a month could save $135 in reduced fares.

The statement also includes language promising free admission to "museums, galleries and historic sites across the province," but no timeline or cost figure was included.

Revenues from personal income, sales tax and corporate income tax rose by $1.6 billion above the projections in the March 2019 budget, and cannabis sales netted the province $80 million.

The new spending is largely funded by lower interest on debt ($430 million) and "drawing on already budgeted contingency funds" from last year's reserve so actual net increase in expenses is only $341 million.

This year, there are no outright firings but instead several pilot projects.

In one program, paramedic services in several still unnamed Ontario communities will begin a pilot where some patients transported by ambulance will not be taken to a hospital emergency room but instead to "more appropriate, lower cost settings."

The province says they can instead go to a hospice, receive treatment on scene or go to mental health crisis centre.

The pilot plan starts sometime in 2020.

While they still plan to battle the federal government on the carbon tax, the Ford government plans to conduct a "province-wide climate change impact assessment" sometime in the new year.

They say they plan to hire outside experts to assess how climate change "will affect Ontario's economy, infrastructure, communities, public health and safety, as well as ecosystems."