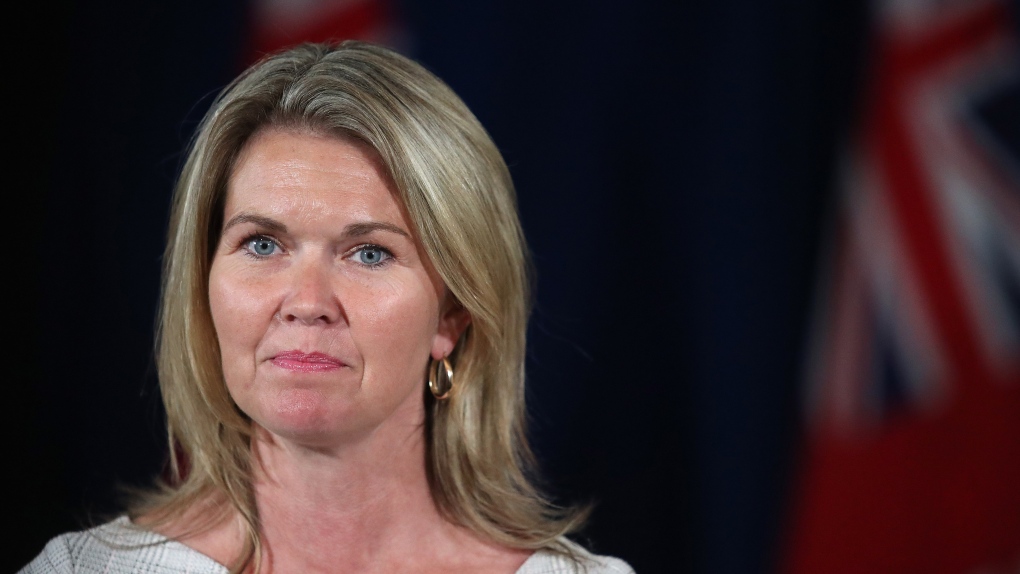 FILE- Ontario Associate Minister of Children and Women's Issues Jill Dunlop makes an announcement at the daily briefing on COVID-19 at the legislature in Toronto, Thursday, June 25, 2020. THE CANADIAN PRESS/Steve Russell-Pool

TORONTO -- Ontario's child welfare system will be redesigned to focus on prevention and early intervention, the provincial government said Wednesday.

Associate Minister of Children and Women's Issues Jill Dunlop said the new strategy will also work to address the over-representation of Black and Indigenous families in the children's aid system.

She said children and youth in care experience worse outcomes than those in a family setting, including lower graduation rates, a higher risk of homelessness and more involvement with the justice system.

"Child welfare should not be the system that is feared," Dunlop said in a news conference.

"No one should be scared to lose their children for speaking to a children's aid society. No woman should be afraid to go to a shelter for fear of losing her children."

The plan will aim to bolster community services and emphasize care in a family setting rather than in group homes where appropriate.

Dunlop said the revamped system will seek more permanent homes for children and youth who can't stay in their families or communities, including a more centralized adoption process.

She said the plan was developed with input from youth, families, First Nations, community organizations and frontline workers through consultations and online surveys.

Wednesday's announcement did not, however, include new funding or legislative changes, nor did it set a timeline for the redesign. Dunlop said the change will be "significant" and will take time.

Critics said that while the child welfare system does need to be reformed, the government's announcement doesn't lay out a real plan to do so.

"Without details, real resources or money, no timelines, and no commitment to transform the laws that govern child welfare, the Ford government is not dealing with these critical issues when Indigenous communities and children and youth in care desperately need a plan," members of the opposition New Democrats said in a statement.

Some advocates suggested more research is needed on outcomes for youth after care in order to know what kind of intervention and supports they need.

"It is tempting to conclude foster care produces poor outcomes; however, it is possible that without intervention youth may have fared worse," the not-for-profit Child Welfare Political Action Committee said in a statement. "Rather, we suggest that foster care has failed to level life outcomes with peers who have not experienced the system. The child protection sector must level up by becoming evidence-based and aspirational. We believe innovations with the best intentions are not effective without impact measurement."

This report by The Canadian Press was first published on July 29, 2020.