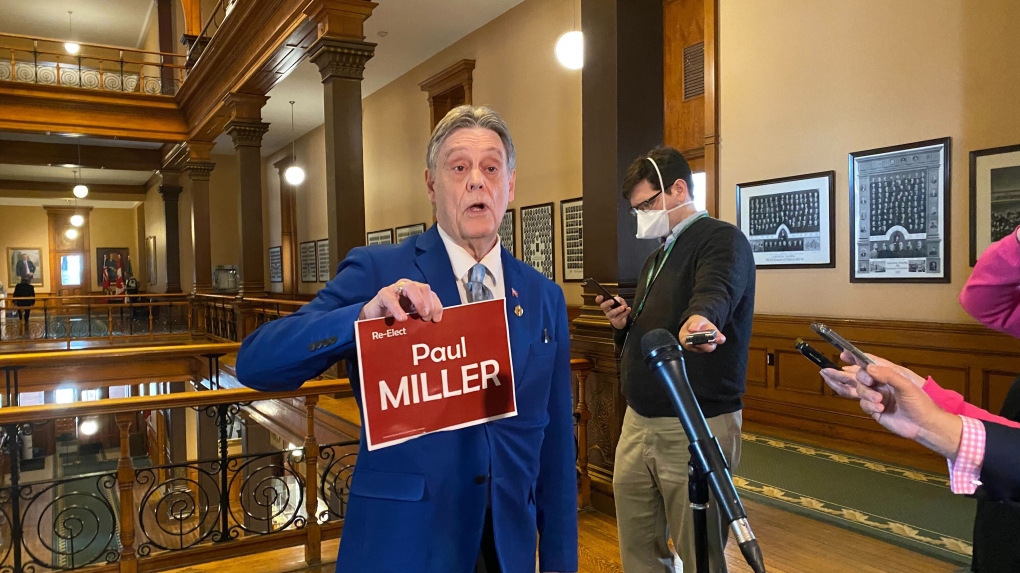 Paul Miller, an ousted member of the Ontario New Democrats, shows his Independent campaign sign at Queen's Park in Toronto on Wednesday March 23, 2022. Miller says he was kicked out of caucus for a Facebook post he claims he did not write. THE CANADIAN PRESS/Holly McKenzie-Sutter

Ontario's New Democrats say they removed a longtime legislator from caucus because he was found to be a member of an Islamophobic Facebook group.

The party's provincial director issued a statement on Wednesday giving more details about Paul Miller's ouster, which was announced last week with few specifics about what prompted it.

Lucy Watson said in a written statement that the party's vetting process ahead of the expected June election discovered that Miller was a member of the Worldwide Coalition Against Islam Facebook group.

Watson said the finding came after "a pattern of troubling behaviour that indicated that Paul Miller may harbour Islamophobic, homophobic and racist views."

"This pattern of behaviour crossed any reasonable line when Mr. Miller's vet was recently finalized. His membership in the Facebook group called Worldwide Coalition Against Islam was discovered," she wrote.

"Any other candidate and any other caucus member -- in any context and attempting to run for any reasonable party -- would be disqualified for ever having been a member of an Islamophobic, racist group."

Her comments came hours after Miller claimed that he does not make his own Facebook posts, and suggested a former staffer may have made offending posts using his account.

He could not be reached on Wednesday to respond to the party's specific allegation.

Earlier in the day, he said he was not given a chance to explain himself before being removed from caucus.

He said he was shown one Facebook post that he says he didn't write, and said he was speaking with a lawyer to contest the party's claims, which he has called "false allegations."

He attributed the party's decision to remove him to "cancel culture" and pointed to tension between himself and party leader Andrea Horwath, saying she did not speak to him directly about the matter.

"We've had our differences over policy, direction the party's going in," he said. "Unfortunately, in our society now, with this cancel culture stuff, if you don't agree with somebody ... they find a way to fabricate things."

He did not elaborate fully on his issues with the NDP's "new direction," but repeated his past assertions that the party wants to run "a new type of candidate."

Miller said he intends to run as an independent in Hamilton-East Stoney Creek, the riding he has represented since 2007, in the upcoming election.

Horwath, who has been party leader since 2009 and also represents a Hamilton riding, did not comment on the situation on Wednesday.

On Monday she said she had not removed a member from caucus before. She called the move a "difficult decision" but said she couldn't provide more specifics at the time.

Watson's Wednesday statement also referenced a 2018 complaint about Miller from a staff member that was resolved, but involved allegations of racist and homophobic remarks.

She said it was the party's "express expectation" that Miller change his behaviour. For some time, she said, "there were no public or private complaints of homophobic, racist or Islamophobic behaviour," but she pointed to an independent investigation by the Hamilton Wentworth District School Board that "continued the old pattern."

This report by The Canadian Press was first published March 23, 2022.

Russians gone from Ukrainian village, but fear and hardship remain

It has been more than 11 weeks since Ukrainian forces wrested back the village of Kalynivske, in Kherson province, from Russian occupation. But liberation has not diminished the hardship for residents, both those returning home and the ones who never left.

A ceremony will be held this evening to mark the sixth anniversary of Quebec City's deadly mosque shooting. Prime Minister Justin Trudeau, several senior federal cabinet ministers and Quebec Premier Francois Legault are among those expected to attend.