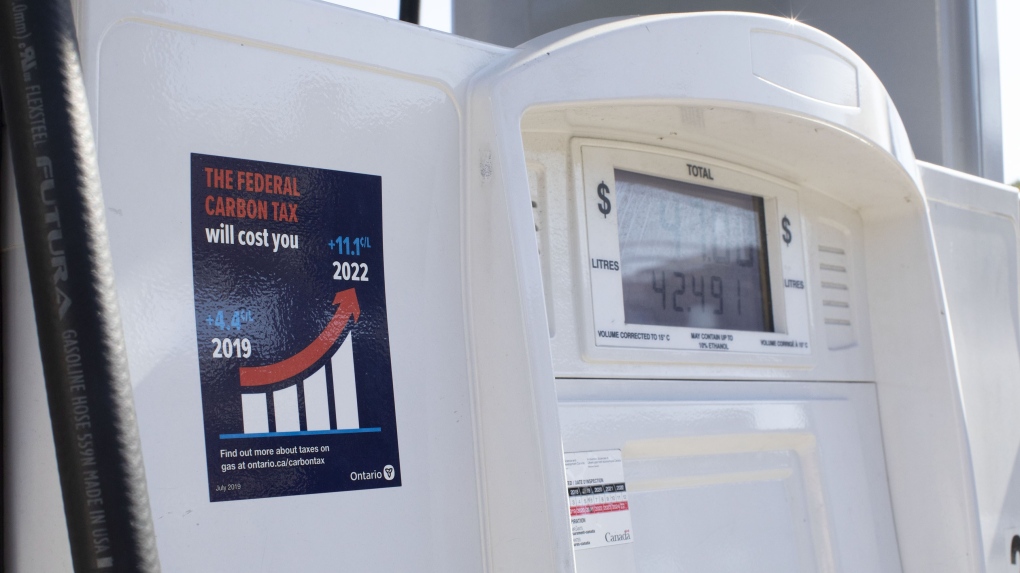 TORONTO -- Ontario's government had no right to "stick it to" the federal Liberals by forcing gas stations to display anti-carbon tax stickers, a Superior Court judge said Friday as he struck down the law as unconstitutional.

Justice Edward Morgan said Premier Doug Ford and his Progressive Conservative government overstepped in mandating the stickers, saying the Federal Carbon Tax Transparency Act could not be justified under the charter.

"The mandatory fuel pump sticker is an unconstitutional attempt to do just that."

Under the law, gas stations that didn't display the stickers would initially face fines of up to $10,000 per day, though a judge later lowered the daily penalty to $150. Morgan said in his ruling that the companies can now choose to leave them up or tear them down.

The stickers show the federal carbon tax adding 4.4 cents per litre to the price of gas now, rising to 11 cents a litre in 2022. They do not include information about rebates available to residents.

Morgan said in the decision that the message was "blatantly advantage-seeking by a political party and a misuse of a governing party's legislative power."

He pointed to a statement Energy Minister Greg Rickford made in April 2019 in which he said the province would "stick it to the Liberals and remind the people of Ontario how much this job-killing, regressive carbon tax costs." That, said Morgan, shows the true purpose of the sticker was partisan.

Rickford said he respects the court decision, "but our government will always stand up for the people of Ontario when it comes to matters that make everyday life more expensive for hardworking families."

The Canadian Civil Liberties Association, which brought the challenge a year ago, is extremely pleased with the ruling, according to the director of its fundamental freedoms program.

"This was very clearly a partisan political message that the government was putting forward -- something that they're completely entitled to do on their own, and when when they're campaigning in their own advertising, but something that they're not allowed to force others to do," Cara Zwibel said. "Hopefully that's a precedent that will carry forward and that governments will be mindful of."

But she noted that while the CCLA won in court, the province was still able to achieve its goal. The stickers have been displayed at gas pumps across the province for well over a year.

A spokesman for the Ministry of the Attorney General declined to comment, saying the department is reviewing the decision.

"As this matter is still in the appeal period, it would be inappropriate for me to comment further," Brian Gray said.

But the Official Opposition urged Ford and his government not to appeal.

"He has already wasted enough of people's money on his anti-carbon price stickers that don't stick -- a partisan and dishonest propaganda campaign," NDP Energy and Climate Crisis Critic Peter Tabuns said in a written statement.

Ontario has challenged Ottawa's right to impose a carbon tax, and the Supreme Court is set to hear that case in September.

This report by The Canadian Press was first published Sept. 4, 2020.

--with files by Shawn Jeffords and Michelle McQuigge.