The province has drastically increased the amount of money someone on Ontario’s Disability Support Program (ODSP) can earn before their benefits are impacted; however funding remains unchanged for those who cannot enter the workforce.

The pledge was made in the province’s fall economic statement Monday afternoon.

The government says it is increasing the monthly earnings exemption for people on ODSP from $200 to $1,000 per month. Individuals on the program who get more than that amount would keep 25 cents on the dollar.

Prior to this change, payments were reduced by 50 cents for each dollar earned after $200.

“These changes would allow the approximately 25,000 individuals currently in the workforce to keep more of their earnings and could encourage as many as 25,000 more to participate in the workforce,” the economic statement says.

Based on these statistics, the new changes will impact about 10 per cent of the province’s nearly half a million ODSP recipients.

For those who can’t work, little has changed.

“I understand they want to do what they can to continue to help the disabled to get into the workforce…but what about the ones who can’t?” ODSP recipient Anne Jensen told CTV News Toronto after the announcement. “We’re just kind of stuck here.”

The province increased ODSP rates by five per cent as part of its election campaign earlier this year, and tied any future increases to inflation, starting in January 2023. However, Jensen called the increase “almost insulting.”

“The five per cent increase was a joke,” she said.

Jensen said that she does not receive the full five per cent increase, and that while every dollar helps she still can’t afford to rent in her hometown of Kitchener.

“Nobody can live like this,” she said. “If we can't pay for rent and food … it's all so very frustrating.”

ODSP recipients currently make about $1,227 a month if they receive the full five per cent increase. This equals roughly $40 a day, or just over $300 a week.

A new report by the Ontario Living Wage Network said Monday that those living in the GTA need to make at least $23.15 an hour to “make ends meet and enjoy modest participation in civic and cultural community.”

Advocates have long called for ODSP rates to be doubled. Every political party except for Doug Ford’s Progressive Conservatives made this pledge during the provincial elections.

Back in July, the Income Security Advocacy Centre (ISAC) sent a letter signed by 200 advocates calling for ODSP rates to be doubled, saying that inflation and soaring costs have made the current rates—which have been frozen since 2018—impossible to live on.

In a statement released Monday, ISAC said the government missed "a crucial opportunity to re-invest surplus dollars into increased social assistance rates, social programs, and programs that will protect and support low-income workers."

"Allowing ODSP clients to keep more of the dollars they’ve already earned is going to go a long way for those who can work," Devorah Kobluk, ISAC’s Senior Policy Analyst, said in a statement.

"Unfortunately, today’s announcement leaves people who rely on (Ontario Works) even more behind. They’ve had no rate increase, they can’t earn any more income, and they are forced to try to continue to survive on $733 a month."

Ontario Works recipients are not subject to a five pre cent increase in benefits.

Speaking to reporters Monday afternoon, Finance Minister Peter Bethlenfalvy said he was “very proud” of the fact that his government increased the income cap for ODSP recipients. He called the decision to tie future increases to inflation “significant.”

He also said increasing the income cap “encourage people with a disability who want to increase their work hours to do so and promote more participation in the workforce.” 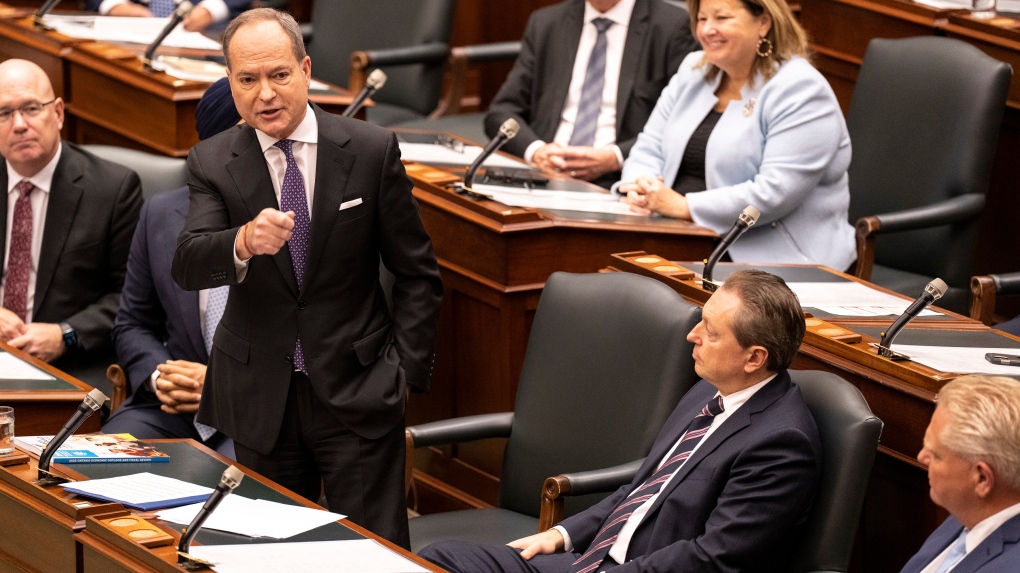 Interim CEO Mark Wafer said there has been a disincentive for those on ODSP to work because of the income cap.

“Now the government of Ontario has changed that in a very, very significant way,” he said. “What it does is it lifts people with disabilities who can work out of poverty and it gives them an opportunity to enrich their own eyes and have financial security.”

Wafer said this policy will impact the lives of thousands of Ontarians.

The fall economic statement was released on the same day that Toronto food banks reported being in a “crisis.”

A previous version of this article indicated that a recipient of ODSP made about $60 a day per month. This was based on a five-day week versus a seven-day week and has been corrected.

The national security adviser to Prime Minister Justin Trudeau says that senior officials are planning ahead for the possibility of another 'Freedom Convoy' protest in early 2023.

Alberta’s deputy premier says the proposed sovereignty act does not grant cabinet unilateral power to rewrite laws behind closed doors, but amendments may be needed to clear that up.

Only one in five Canadians are aware that a person with HIV can't sexually transmit the disease if they are taking the proper medication, according to a new survey that suggests Canadians still have a long way to go in understanding the medical and social realities of HIV.