Ontario announces more than $20M in funding for Peel police

The province made the announcement Friday morning at a news conference held in Mississauga, saying its aim was to give police officers the tools and resources they need to increase community policing.

“Violent crimes and violent individuals and the nature of these incidents require a significant amount of resources and the skills to investigate them,” Peel Regional Police Chief Nishan Duraiappah told reporters at the news conference.

“Today’s provincial funding will go toward our comprehensive response to mitigating and addressing violent crime, specifically gun and gang crime in our community.”

“We look forward to enhancing our response to this serious risk in our community.”

Premier Doug Ford was also present at the news conference Friday, and told reporters that the funding is a message to criminals that gun violence won’t be tolerated in the region. 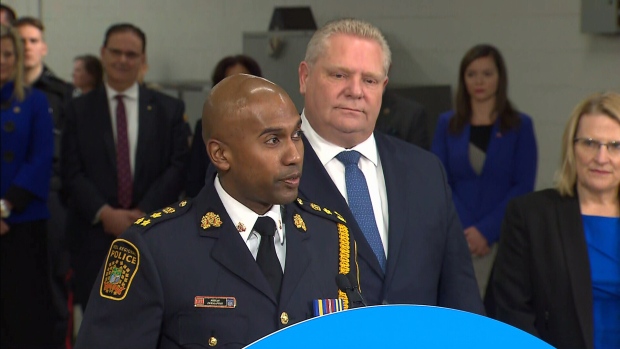 “Today’s funding will give police additional support to go after the dangerous criminals and put them behind bars where they belong,” he said.

“Too many of our young people in Peel Region are being recruited and preyed on by these gangs, so we need to intervene early to stop the violence.”

A part of the funding will go specifically toward the police service’s community mobilization program, which assigns officers to work with members of the community on projects to improve public safety, the province said.

The province said the funding is in addition to its “already committed” plans to create an initiative titled the “Intensive Firearm Bail Team in Peel Region,” which focuses on prosecuting people involved in firearm-related offences in the GTA starting this year.

Brampton Mayor Patrick Brown said the funding announcement Friday responds to his city’s call for better support for the “GTA-wide problem” of gun and gang violence.

He added the funding will ensure Peel Region is not a “convenient place” for criminal activity due to a lack of resources for local police.

“This is an important step to public safety … we have been asking about gun and gang funding repeatedly over the last year,” he said. “It’s so reassuring to know we have a provincial government that has our back in this battle.”

This past summer, Peel police reported in its 2018 Annual Report that gun violence has been a major problem for the region. In 2018, police said they seized 259 firearms and investigated 504 potential shooting, an increase of 18 per cent since 2017.