From Trinity Bellwoods Park in the north to the Fort York grounds in the south, travelling between some of the city’s green spaces will now be a little easier for pedestrians and cyclists.

The Garrison Crossing Bridge, which opened to residents on Tuesday morning following a ribbon cutting ceremony, was formerly known as the Fort York Pedestrian. 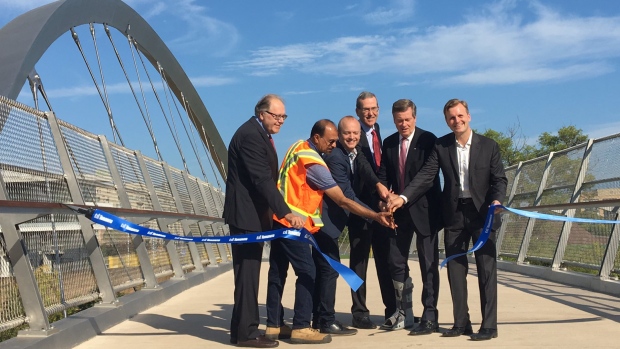 “The Garrison Crossing pedestrian and cycle bridge creates a vital connection, offering a new passage to the waterfront while improving networks within the surrounding communities,” the City of Toronto said in a news release issued on Tuesday.

The stainless steel bridge spans two rail corridors in the city’s downtown core and is the first of its kind in Canada, according to officials.

“The 52-metre northern bridge structure spans from the South Stanley Park extension over the Kitchener rail corridor and lands on the north side of Ordnance Triangle Park over the Lakeshore West rail corridor, landing in the grounds of the Fort York National Historic Site,” the City said. 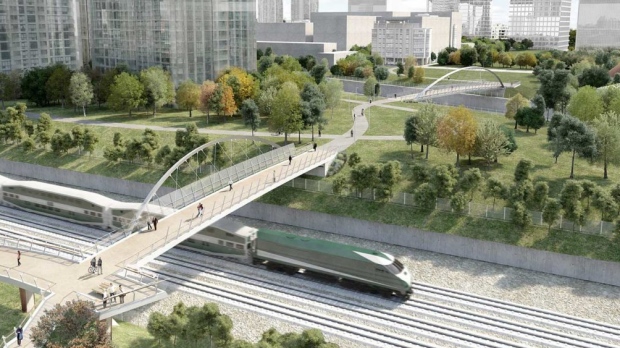 Layton touted the efforts of CreateTO, the City’s new real estate agency, in the project.

“I’m proud to see that the hard work by our partners and the support from the community for the project has helped bring us to where we are today,” he said. “This new pedestrian and cycling link will allow for new transportation routes and connect our parks and greenspaces for all Toronto residents.”

Right on time. New crosswalk we approved towards end of last term so that people could safely reach ramp to the Garrison Crossing Bridge. Thanks to @nometa for his hand in this. pic.twitter.com/LOTk4lXa8I

Construction on the project began back in 2016. The bridge and surrounding trails will be maintained by the City’s transportations services and parks forestry and recreation divisions.